Here's something definitely not worth toasting. Craft beer brewers are now taking a hit in the federal government shutdown. 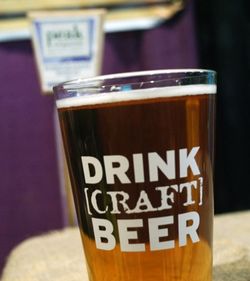 Treasury's Alcohol and Tobacco Tax and Trade Bureau (TTB) is no longer issuing permits to new breweries. TTB also approves new beer recipes and labels, which are on hold until Congress can agree on how to fund all federal agencies.

This is a major problem for the craft beer industry, which relies on customers who are used to a regularly flowing supply of new and seasonal beers.

Paul Gatza, director of the Brewers Association, says the federal work stoppage could essentially stop his industry's businesses indefinitely if they didn't already have their brewing paperwork in place before offices closed on Oct. 1.

One craft brewer in Milwaukee who has applications pending for new packaging and a new dark lager says if the shutdown drags out he could lose $8,000 a month. Not an insignificant sum for a small company.

The tiny bit of good news, at least from Uncle Sam's revenue perspective, is that one part of the Tax and Trade Bureau's job is considered essential. It is still processing taxes from existing craft beer permit holders.

What's your favorite craft beer: Beer Hunt, a social app designed so that brew buddies can share information about craft beer, put together an infographic of state favorites.

This visual was based on all of the beers checked in on the iPhone app through mid-June. The larger the beer's image, the more popular it is overall.

I'm not familiar the Texas choice, Real Ale's prize-winning Firemans #4 Blonde Ale that's brewed just up the road from Austin in Blanco. Based on the Beer Hunt recommendations and a reviewer's assessment that the "tasty blonde ale...offers good refreshment with some interesting flavors," I'll have to track down a bottle (or two!)

Is your favorite craft beer on the infographic? Or do you have another suggestion from your state?

Either way, drink responsibly of the craft brews already out there. With the Tea Party Republicans still holding sway in shutdown negotiations, who knows when new craft beers might be on tap.