Government shuts down. Who, besides citizens, will pay?

Oct. 1, the beginning of the 2014 fiscal year, is more than half over. The stalemate between Congressional Republicans and Democrats over a stopgap spending bill is far from over.

The biggest stumbling block is the continuing stubbornness insistence of House conservatives to tie Uncle Sam's operational costs to the president's signature health care law. The resistors, most of them recently elected thanks to Tea Party support, want Obamacare, as the Affordable Care Act is popularly known, either defunded or at least delayed for a year.

That ship, folks, has sailed.

The health care reform law's insurance coverage exchanges opened today and despite some expected first-day glitches, people are signing up. In fact, some of the problems today are from too many people wanting to get coverage. 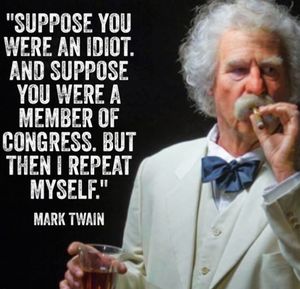 Days vs. weeks: So what's next?

Best case scenario is that an agreement, at least one for a month or two, is hammered out in the next few days.

Worst case scenario, Mark Twain's famous dig at federal lawmakers is proved true as the budget fight merges with the debt ceiling issue in a couple of weeks.

Who's working: In the meantime, services that are deemed essential by the various federal departments will continue.

This means Social Security beneficiaries will continue receiving checks. My mother is relieved. So are the hubby and I, since we would have had to float her a loan to pay her rent and buy groceries.

Air traffic controllers, prison guards, FBI agents and border patrol agents are on the job. So are active military personnel. All of these folks are deemed critical to the country's national security.

NASA Mission Control will continue supporting astronauts serving on the International Space Station. That's a relief. None of us wants to see a real-life version of "Gravity."

And the U.S. Postal Service, which gets no tax dollars for day-to-day operations but rather relies on income from stamps and other postal fees, is keeping its branches open and delivering mail.

Who's furloughed: But plenty of other federal institutions are closed, at least in part.

National parks, museums and the National Zoo in Washington, D.C., are closed. That's right. The Baby Panda Cam is offline.

As for the various federal departments, the extent of disruption varies. The Environmental Protection Agency, according to administrator Gina McCarthy, "effectively shuts down."

Veterans' Affairs is still offering medical services, but if the shutdown drags out, it won't be able to process benefits payments.

The Food and Drug Administration will execute recalls of food and drugs if needed during the shutdown, but most of the other oversight would be put on hold.

The Securities and Exchange Commission will still post corporate filings to its website, but staff members won't be around to review them.

And aside from the offices that oversee America's nuclear operations, the Energy Department would basically shut down.

The Office of Management and Budget has compiled a list of and links to all the federal agency government shutdown contingency plans.

The Washington Post's WonkBlog also takes a comprehensive look at how a government shutdown works, or rather doesn't.

Most of the IRS is closed: The Internal Revenue Service has put its contingency plan into effect.

The agency also sent out an email to tax practitioners today, noting that, "Due to the current lapse in appropriations, IRS operations are limited. However, the underlying tax law remains in effect, and all taxpayers should continue to meet their tax obligations as normal."

As for the "as normal" tax obligations, the IRS elaborates on a special IRS Operations During the Lapse in Appropriations Web page.

So now we wait. Here's hoping that the IRS is prescient. Its contingency plan is only good for five days of no funding. Beyond that, the agency will have to reassess how it will cope.

Who's to blame? A new Quinnipiac University poll finds that the government shutdown is not popular. Seventy-two percent of American voters oppose Congress shutting down the federal government to block implementation of the Affordable Care Act, or Obamacare.

And while everyone on Capitol Hill is catching heat, the GOP is faring the worst.

Quinnipiac pollsters found that most respondents, 55 percent, blame gridlock in Washington on Republican legislators who are determined to block any Obama initiative. Thirty-three percent say the problem is because of Obama's lack of skill.

Be sure to let your Representative and Senators know what you think about the first federal government shutdown since 1995. I was in D.C. when that happened. It wasn't fun back then either. The GOP found that out very painfully when its candidates were whacked in the next election cycle.

Please let me and the ol' blog's readers know what you think, too. Take the poll below and elaborate on the shutdown in the comments section. Be warned, though. I have final say over what gets posted and simply name-calling won't cut it.