"I think, personally, it would bring stability to the world markets." 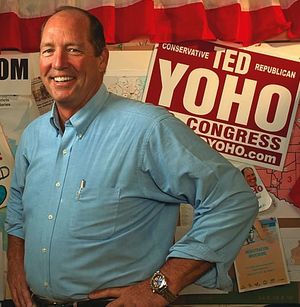 That's the prediction by Florida Republican Rep. Ted Yoho of what will happen if Congress doesn't raise America's debt ceiling by Oct. 17 and lets the country default on what it owes.

Yoho already is no stranger to outrageous statements. You might remember when he called the 10 percent tax on indoor tanning services racist.

But the Tea Party darling's assessment of what might happen if the United States breaches the impending debt ceiling is being called the scariest, dumbest and stupidest thing said so far during this latest financial crisis.

And those evaluations are incredibly kind to the freshman legislator in comparison to the comments folks are leaving about Yoho's financial acumen on the always judgmental Internet.

Debt ceiling dangers: Economists -- and a lot of Yoho's colleagues -- also question the idea that breaking the debt ceiling is no big deal.

Among the five reasons to fear the debt ceiling, Bloomberg editors include the fact that world  markets will see the U.S. government as grossly and dangerously incompetent (maybe the word "more" should have been used in this point), triggering a global crash, and here at home our government's fiscal problems will only get worse.

Billionaire financier Warren Buffett likens the Republican's tactics in this fiscal debate to a nuclear bomb.

"If they seriously default on the debt, what we're really talking about is a depression," says veteran financial sector analyst Richard Bove, VP of research at Rafferty Capital Markets. The fallout, he says, would be much worse than the 2008 recession from which the U.S. economy is still trying to recover.

False family finances analogy: With those kinds of warnings, why does Yoho think the debt ceiling is no big deal? Why, in fact, does he think blowing past it would be healthy for the economy?

"We need to have that moment where we realize [we're] going broke," Yoho told the Washington Post.

That "we" reference is used a lot by conservative legislators in arguing that the U.S. government is too big and is prodigiously spending our money and mortgaging "our children's" future (it's always about the kids, not the next election, right?). They liken the fictional Uncle Sam to a real family.

"We have to rein in our spending," these lawmakers say. "If our families don't have the income, we just cut back."

Uh, no, we don't. We tend to use credit cards when times get tough to give us a cushion to buy what we need.

And, as Ezra Klein and Evan Soltas note in today's Washington Post Wonkblog, when the credit cards get maxed out and the family still has no money, they face serious consequences if they opt to not pay the bills they've racked up. They point out:

That moment when a family realizes it's broke and stops paying their mortgage, credit card bill, etc.? It's not a good moment for them. It's a moment that wrecks their credit score and makes it harder for them to be "not-broke" ever again. To try and improve the U.S.'s finances by sharply and permanently increasing its borrowing costs is like trying to prove to your sister that her house is a firetrap by actually setting it on fire.

Maybe he, like a lot of folks is not clear on exactly what the debt ceiling is.

It's the total amount of money the U.S. government can borrow by selling Treasury bonds to pay its obligations, which include interest on the national debt and Social Security and Medicare benefits among other bills, such as those run up to pay for war costs, that the country has accumulated.

The current debt limit is $16.7 trillion. The U.S. exceeded that limit in May, but the Treasury Department has since used various options to continue borrowing. Those extraordinary measures, says Treasury Secretary Jacob Lew, will run out on Oct. 17.

The debt ceiling was created in 1917 during World War I uncertainty about the total costs of paying for U.S. involvement in the battles. Since 1960, Congress has raised the debt ceiling 78 times, usually without a major Capitol Hill confrontation.

Now I grant that the debt ceiling isn't a Financial Literacy 101 course. But even on those, U.S. citizens are failing.

"Even if we grade on a very generous curve, many Americans flunk when it comes to financial literacy," says Richard Thaler in this weekend's New York Times article Financial Literacy, Beyond the Classroom.

Part of the problem is that today's financial education efforts are too often not really that helpful.

"Those who receive it do not perform noticeably better when it comes to saving more, for example, or avoiding ruinous debt," writes Thaler, a professor of economics and behavioral science at the Booth School of Business at the University of Chicago. "Even more depressing, the results of efforts aimed at low-income people are particularly weak. Those who need the help most seem to benefit the least."

Fixing our financial education system: Are we all good and depressed now, what with the government shutdown, the looming debt ceiling and our financial knowledge shortcomings?

Well, there is hope, if not for Congress at least for us trying to make better sense of our financial needs and how to best meet and deal with them.

Thaler suggests a more user-friendly financial system. He cites workplace 401(k) plans where companies have provided employees a well-designed default investment option, such as a low-fee target-date fund. Most unsophisticated investors are better off using that option than trying to be their own portfolio managers, says Thaler.

"The same principle can be used in other areas, from credit cards to checking accounts," he writes. "The financial services industry -- either on its own or as required by government regulators -- needs to find ways to make it easier for people to make sound decisions. And those financial firms that engage in fraudulent practices should be prosecuted and stopped."

How financially literate are you? How would you recommend companies, schools and families improve their financial knowledge?

And if you have an idea about how to get out of the current financial and political standoff in Washington, D.C., please share that, too, with us here at the ol' blog and with your Representative and Senators.

Financial quiz answers: The correct question 1 response is more than $102. The answer to number 2 is that you would be able to buy less than you can today. Number 3's statement about single stocks being safer investments than diversified stock mutual funds is false.

Lest you think the questions were too easy, take a look at the survey of Americans older than 50 that was conducted by economists at George Washington University and the Wharton School of the University of Pennsylvania. The researchers found that only a third could answer all three questions correctly.