The Colorado Taxpayer Bill of Rights (TABOR) Foundation says the state's new candy tax is a constitutional trick and is suing to eliminate the tax on the sweet treats. 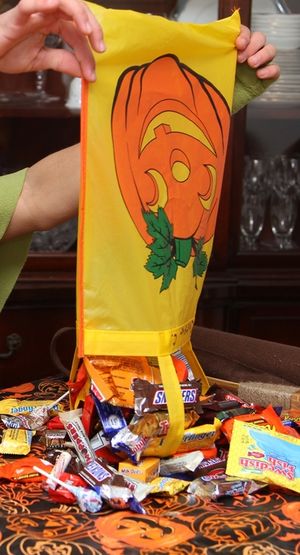 Candy is only one thing subject to the state's new tax, which will take effect Jan. 1, 2014. Sales tax also will be tacked on next year to the price of soft drinks, cigarettes, advertising materials and food containers.

But this Halloween week it is candy that's on most folks' minds. If the law stands, treats for little goblins and ghouls this time next year will cost more.

Constitutional tax question: While the TABOR Foundation is opposed to the tax itself, the group is going after the method by which it was created.

Colorado's General Assembly approved HB13-1272 and it was signed into law by Gov. John Hickenlooper in May. The bill authorizes the Regional Transportation District (RTD) and the Scientific and Cultural Facilities District (SCFD) to collect the new sales taxes, which are estimated will bring in almost $3 million next year to metro Denver counties within the taxing jurisdictions.

But state lawmakers had no constitutional authority to grant these new taxing abilities, according to the lawsuit filed in Jefferson County District Court.

The case, which is being handled by Mountain States Legal Foundation (MSLF), contends that the new taxes were levied without voter approval in violation of Colorado's Taxpayer's Bill of Rights.

Before the new law was enacted this past spring, RTD and SCFD officials had no authority to levy sales and use taxes on candy and the other items to be taxed.

And since RTD and SCFD are government districts as defined by the state's Taxpayer Bill of Rights, which was approved by voters as an amendment to the state's constitution, MSLF attorneys argue that the districts' tax policies are subject to voter approval before they can take effect.

So, says the lawsuit, the law unconstitutionally created the new taxing authority for RTD and SCFD.

The bottom line, according to the filing, is no voter OK, no new taxes.

"a preparation of sugar, honey, or other natural or artificial sweeteners in combination with chocolate, fruit, nuts, or other ingredients or flavorings in the form of bars, drops, or pieces. 'Candy' shall not include any preparation containing flour and shall require no refrigeration."

The singling out of specific food items for taxation is not only a tedious process, it's bad tax policy. Yes, I used to work for Nestlé, the world's largest food manufacturer and one famous for its confections.

But before and after my years with the Swiss food giant, I've hated how states use food as a tax weapon. It's ostensibly for the benefit of consumers. Such patriarchal legislating, however, is as distasteful to me as a Mounds bar.

And no, that candy is not on my hit list because it's made by a major Nestlé competitor. I just hate coconut, including in Piña Coladas.

The truth is that food taxes, just like most so-called sin taxes, are not really designed to make a citizenry healthier. They are cooked up primarily to add to a state's or city's or some other taxing jurisdiction's treasury.

Candy can, however, offer some other valuable tax education for trick-or-treaters.

Be safe while you're out collecting material for tomorrow's tax lesson. And have a very Happy Halloween!