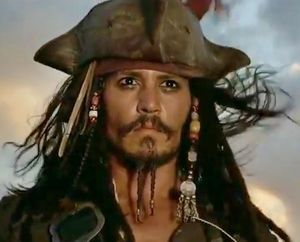 If you can pull yourself away from that DVR of Pirates of the Caribbean: The Curse of the Black Pearl -- Hey, don't be embarrassed; I watch it as often as I can myself. -- it's time on this International Talk Like a Pirate Day to discuss some swashbuckling taxes.

Yes, taxes and pirates have many connections.

Before we broke away from Great Britain, we had relied on that country's vaunted naval force to help protect colonial ships from Barbary Coast pirates. During the Revolution, Benjamin Franklin helped hammer out a 1778 treaty that called on France to help protect American vessels against Barbary pirates.

The hijackings of American ships continued, however, with the young country paying ransoms for the release of its sailors. In 1795 alone, the United States was forced to pay nearly a million dollars in cash, naval stores and a frigate to ransom 115 sailors from Algiers. A subsequent treaty called for annual gifts to Algiers, Morocco, Tunis and Tripoli to end the piracy against U.S. vessels.

Many were unhappy with the system. As early as 1788 in The Federalist No. 41, James Madison wrote that a stronger federal government was needed to maintain a navy that would "be a principal source of her security against danger from abroad."

Thomas Jefferson agreed. In a 1786 letter to James Monroe, Jefferson said paying tribute merely invited more demands and that the only solution was a strong navy to fight the pirates. When Jefferson became president in 1801, he refused Tripoli's demands for an immediate payment of $225,000 and an annual payment of $25,000. Tripoli declared war and Jefferson sent a squadron of naval vessels to the Mediterranean.

And how did we come to have such vessels? Thanks to taxes which were authorized by section 8 of our Constitution, giving the federal government the power to lay and collect taxes on its citizenry for, among other things, the creation and maintenance of a navy.

So piracy on the high seas was one of the first uses of taxpayer supported military force.

This fall we'll be able to see a theatrical take on our modern U.S. Navy's role in thwarting pirates in Captain Phillips.

The movie tells the true story of Capt. Richard Phillips, portrayed by Tom Hanks, who survived being held hostage by Somali pirates in 2009. The event marked the first time any American cargo ship was hijacked in 200 years.

The spate of Somali pirate incidents has some arguing for a tax to combat the problem. A paper from the Barcelona Graduate School of Economics argues that a shipping tax could offer a less dangerous alternative than the "extraction of resources through pirate attacks:"

[I]t is instructive to consider how many Somalis could be hired for one year using the additional resources that we estimate are expended by the shipping industry in response to the threat of piracy. ... [A] conservative estimate of the costs of piracy to the shipping industry is about $1.3 billion. We use wage data from the Somali Food Security and Nutrition Analysis Unit (FSNAU) presented in Shortland (2011) to calculate a yearly wage of about $870. This means that the extra spending due to piracy could finance one year of employment for more than 1.5 million laborers at the going market rate in 2010. This does not mean that such a transfer scheme would be realistic or that it would prevent piracy. But it illustrates the scale of losses to the industry relative to the reality of the Somali economy.

Deducting a pirate's ransom: Now about those ransoms demanded by modern-day pirates and their counterparts of yore. Under our current tax code, a ransom payment by an individual is a tax deductible expense.

It would be counted on Schedule A in the casualty and theft section. Internal Revenue Service Publication 17 notes that a theft is:

[T]he taking and removing of money or property with the intent to deprive the owner of it. The taking of property must be illegal under the laws of the state where it occurred and it must have been done with criminal intent. You do not need to show a conviction for theft.

Among the specific instances of theft listed in the IRS document is kidnapping for ransom.

In a famous non-pirate ransom case, financier J. Paul Getty refused kidnappers' $3 million demand in 1973 for the return of his grandson. The senior Getty agreed to pay no more than $2.2 million, the maximum ransom that would be tax deductible. He lent his son, the ransomed boy's father, the remaining $800,000 at 4 percent interest to cover the full amount sought by the kidnappers.

So yo-ho, a pirate's ransom could be deducted.

Taxing a pirate's treasure: We all know that prizes are taxable income. So are ill-gotten gains, such as pirate booty.

That's right. The IRS doesn't care how you obtain your money. It just wants it's piece of the pie.

The tax agency specifically notes, again per Pub. 17, that:

Income from illegal activities, such as money from dealing illegal drugs, must be included in your income on Form 1040, line 21, or on Schedule C or Schedule C-EZ (Form 1040) if from your self-employment activity.

That taxability also applies to you if that treasure map is correct and you dig up a chest full of pieces of eight. 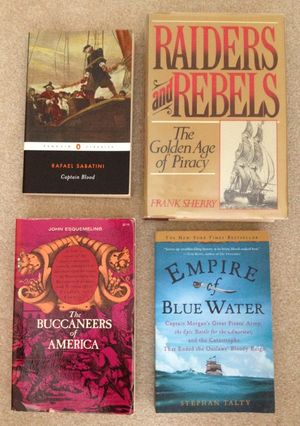 Pirates renaissance: I've been fascinated by pirates since I was a kid. I even took a history course in college that touched on the subject. To the right are some of the pirate books in my current personal library.

Then there's that boxed set of Pirates of the Caribbean movies.

Yes, the first one was the best (so far), but I have them all -- with the fifth installment, Dead Men Tell No Tales, to be added as soon as it is finally available -- because, as Capt. Jack Sparrow said in his first cinematic sword fight, "Pirate."

The Curse of the Black Pearl makes Fansided list of its top eight pirate movies.

E! offers its selection of The Most Arrrgh-esting Pirates in Pop Culture.

Finally, to bring us back to taxes before we weigh anchor on Talk Like a Pirate Day 2013, a question:

Where do pirates get their taxes done?