If you are a Coloradan who didn't make your estimated tax payment that was due on Monday, Sept. 16, because of severe storms, flooding and landslides in your area, you might have more time.

The Internal Revenue Service has announced that certain taxpayers in Adams, Boulder, Larimer and Weld counties, which have been designated as major disaster areas by the Federal Emergency Management Agency, now have until Dec. 2 to send in that third 1040-ES voucher for the 2013 tax year. 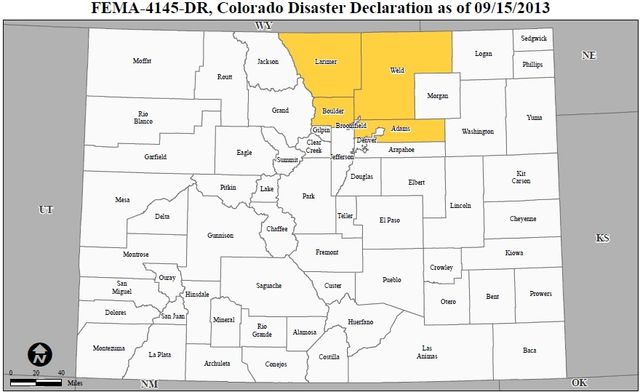 That deadline extension is in addition to the special tax option these taxpayers have to claim their disaster losses on an amended 2012 return and get added refund money now rather than waiting to claim the losses on their 2013 tax forms they'll submit next year.

The early December deadline also applies, says the IRS, to businesses that had received an extension until Sept. 16 to file their 2012 returns.

In addition, the IRS is waiving the failure-to-deposit penalties for employment and excise tax deposits that were due on or after Sept. 11 and on or before Sept. 26, as long as the deposits are made by Sept. 26.

As for individual taxpayers, storm affected Colorado residents who got filing extensions until Oct. 15 also now have until Dec. 2 to fill out their tax year 2012 Form 1040s.

The IRS automatically identifies taxpayers located in the covered disaster area and will apply the automatic filing and payment relief.

However, if you live or have a business outside the covered disaster area and believe you, too, should get more time, call the IRS' toll-free disaster hotline at 866-562-5227 to discuss your situation and possible tax relief.

Also check in with FEMA periodically. The agency may update its assessments and add additional Colorado counties that would be covered under the major disaster declaration. Those additions then would be part of the IRS tax relief.

You also can keep track of any tax assistance changes at the IRS' special Web page Tax Relief in Disaster Situations.

Bella,
If you use tax software, you'll get the option to efile. Many tax professionals also are able to efile for you.

Unfortunately, the IRS Free File efile option is no longer available. It ended on Oct. 15.
Kay

where can i go to efile?

This is good news, indeed, for flood victims. It's terrible tragedy, and so many have lost their homes. The new deadline should give them a bit of time to collect their bearings.