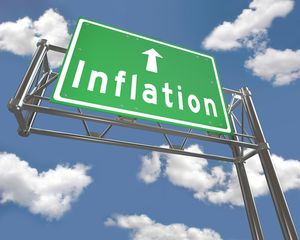 Inflation hasn't been much of a problem this year (despite what my mom says every time we head to the grocery store!).

But prices have gone up enough for one tax services company to project changes in the 2014 federal income tax brackets that should save most of us at least a little money.

CCH, a Wolters Kluwer tax and accounting business, each year analyzes Consumer Price Index data for September of the prior year through the current August and projects how the inflation rate is expected to affect the many U.S. tax code provisions.

The CCH projections are a preview of the official Internal Revenue Service inflation adjustments that will trickle out over the last quarter of the year.

Inflation's tax payoff: Whether it's a prediction or the final word, inflation's effect on taxes works the same. When there is inflation, indexing of tax brackets lowers what we owe the U.S. Treasury by including more of our incomes in the lower brackets.

"Indexing for inflation has become an established part of our tax system, and it's likely to be a part of the tax law for the foreseeable future, even as Congress debates changes to the tax rates themselves," said George Jones, an attorney and CCH Senior Federal Tax Analyst, in an announcement accompanying the 2014 projected numbers.

Most taxpayers benefit from inflation adjustments, added Jones, since the adjustments tend to preserve the value of most of the tax code's dollar-based benefits year after year.

OK, I hear you. Enough with the talk/typing. Exactly what do CCH's 2014 tax brackets look like? The four tables below break it out according to taxpayer filing status, along with a comparison to the current 2013 tax brackets.

Mixed tax bag for higher earners: CCH notes that higher income taxpayers get some good and bad news in 2014.

First, the bad. Wealthier filers will continue in 2014 to face the 3.8-percent surtax on net investment income and a 0.9-percent Medicare contributions tax on earned income. Both of these added taxes, created as part of health care reform known as Obamacare, took effect this year.

The net investment income tax kicks in once a filer's adjusted gross income exceeds $250,000 if married and filing a joint return or is qualifying widow/widowers; $200,000 for heads of household and single filers; and $125,000 for married taxpayers who file separate returns.

The additional Medicare contributions tax is triggered when a taxpayer's wages, compensation or self-employment income exceed those same threshold amounts.

The earnings levels on both these taxes, however, are not adjusted for inflation. So while your income might go up in 2014, the trigger levels will be the same.

But CCH is predicting some good news, too, for higher earners.

The amount you can earn before reaching the 39.6 percent top income tax rate that was enacted in January as part of the American Taxpayer Relief Act (also known as ATRA or the fiscal cliff bill) will increase in 2014, as noted in the tables above, thanks to inflation.

So you can earn a bit more next year before you must pay Uncle Sam at the top tax rate.

The income tax brackets are just part of the 2014 inflation projections CCH released this week. I'll be looking at the rest of them in separate posts over the next few days.

You put the whole thing together much better and more concisely than I did. Never occurred to me to put all the data in the CCH release into tables. I'll have to check in on your blog regularly from now on.

The 2014 tax code can be confusing we can help make sure to speak with a qualified CPA before you begin.