Tax-related identity theft: Its growth and IRS efforts to stop it

In 1938, the E.H. Ferree company, a wallet manufacturer in Lockport, N.Y., decided to promote its product by showing how a Social Security card would fit into its product.

A sample card was inserted in each billfold. It was half the size of a real Social Security card, printed all in red and stamped with the word "SPECIMEN."

One thing, however, was real.

The number 078-05-1120 belonged to Hilda Schrader Whitcher, secretary to Ferree vice president and treasurer Douglas Patterson. Patterson thought it would be a clever idea to use a real number on the sample Social Security card. 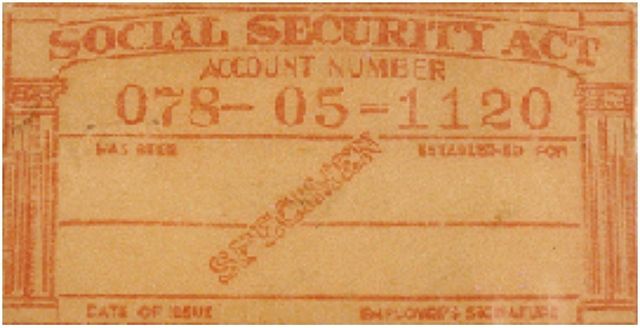 And that nine-digit identification number that's required for myriad tax transactions is this week's By the Numbers figure.

The Social Security Administration voided the number (issuing Whitcher a new, unpublicized one) and put out the word that the Woolworth Social Security number, as it came to be known, was not valid for use.

That's an interesting observation. Just how many of the Woolworth Social Security number recipients used the nine digits out of ignorance and how many were crooks who were handed a gift?

Identity theft as we know it today has evolved over the years.

Criminals will certainly take advantage of a present like Whitcher's ID number. But they also concoct schemes, some basic and some quite sophisticated, to get Social Security numbers and personal data.

And more and more, crooks use the info to help perpetrate tax-related fraud.

The topic was a popular one at the Internal Revenue Service Nationwide Tax Forum I attended last week, with two separate sessions on the agenda. I attended both.

Acting IRS head Danny Werfel also touched on the subject when he spoke on July 30 to Forum attendees.

Congress looks into tax ID theft: Werfel then took his data back to Washington, D.C., where on Aug. 2 he went before the Government Operations Subcommittee of the House Oversight and Government Reform Committee to answer questions about identity theft and tax refund fraud.

The Representatives on the panel came armed with their own statistics. In announcing the hearing, Subcommittee Chairman John Mica (R-Fla.) trumpeted the disturbing data:

While the hearing obviously was the latest political slap at the embattled IRS, it's hard to argue with numbers.

But Werfel gave it a shot with some figures of his own. In his testimony, he noted:

"More than 3,000 IRS employees are currently working on identity theft, more than double the number at the start of the previous filing season. We have also trained 35,000 employees who work with taxpayers to recognize identity theft and help victims.

So far this calendar year, the IRS has worked with victims to resolve more than 565,000 cases.

This is more than three times the number of identity theft victim cases that we had resolved at the same time last year.

Our fraud detection efforts have increased as well. We expanded the number and quality of our identity theft screening filters, and we have suspended or rejected more than 4.6 million suspicious returns so far this calendar year.

There's the sheer volume and complexity of tax identity theft as criminals continue to devise new ways to steal personal information and use it for illegal gain.

The agency is making some progress here. During the Tax Forum session on IRS efforts to fight ID theft, it was announced that the agency is moving from 32 filters used this last filing season to screen returns for possible fraudulent activity to 79 filters next season.

That will help. But so will the system upgrades the IRS wants and Congress must agree to fund. And taxpayers need to do their part by staying alert and not falling for schemes such as phishing and fake IRS websites.

More tax blogging: As noted earlier, Werfel talked about IRS efforts to fight tax-related identity theft. That was one topic covered last week at my other tax blog.

Also over on the Bankrate Taxes Blog last week, I looked at Nike's shoe-named tax shelters.

Final Tax Forum tunes tally: OK, all you tax and music mavens who have been waiting so patiently, thank you. I am finally here to end the suspense.

Between the final three Tax Forum seminars I attended on Thursday morning, I heard: 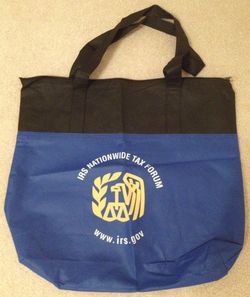 And then came the finale from the hardest working man in show business and at this Tax Forum's intermissions, James Brown: Give It Up or Turn it Loose, Get Up (I Feel Like Being a) Sex Machine, Super Bad and Papa's Got a Brand New Bag.

And so did I! Yep, that's my new Tax Forum accessory there to the right.

Don't worry IRS scandal monitors and Treasury Inspector General for Tax Administration. It's not that substantial of a tote and it only contained a pen.

I don't think the swag costs are that extravagant.