Sin taxes, the added sales taxes on products usually deemed unhealthy, might discourage the targeted bad habits but they do nothing for a state's tax collection efforts.

That's one of the findings of a new study on the fiscal impacts of tobacco taxes, released by the National Taxpayers Union Foundation (NTUF).

The study by NTUF, the research affiliate of the nonprofit taxpayer advocacy group the National Taxpayers Union, also found the higher tobacco taxes tend to lead to more taxes in other areas.

High tobacco and other taxes: The NTUF statistical data show that states with the highest cigarette taxes often have remarkably higher-than-average tax burdens. 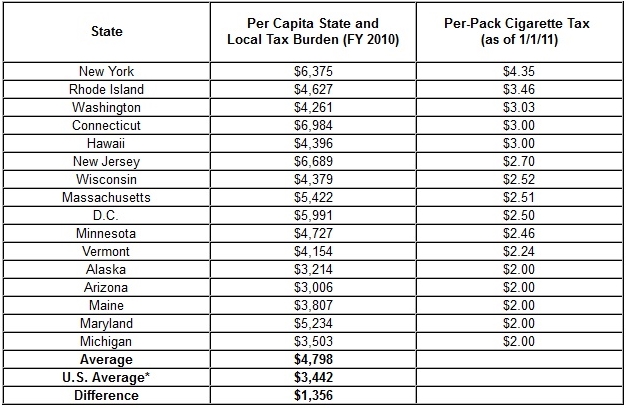 *Excluding the 15 states (plus the District of Columbia) listed in this table. Table compiled from Tax Foundation data.

Conversely, NTUF found that in states where cigarette taxes are lowest, total tax loads are almost always below the national average. 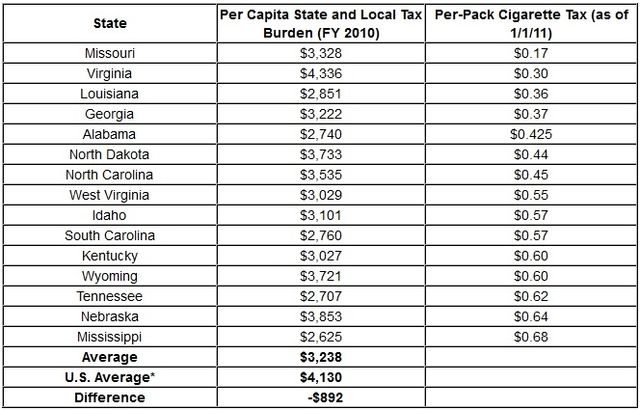 *Excluding the 15 states listed in this table. Table compiled from Tax Foundation data.

One tax leads to another and another: In addition, says the NTUF study, tobacco tax hikes tend to be followed by tax increases on other products and services within a short period of time.

Making up the difference: Why are tobacco tax hikes likely to encourage other tax increases? Basically it's the slippery slope explanation. Politicians often justify the added taxes by saying that they can use the new revenue to plug budget deficits and/or fund programs in areas like health care or education.

The subsequent taxes also are a way to make up the tax money that the sin tax isn't generating. And why isn't the tax bringing in the expected money? Because on one hand, sin taxes do one part of their job, discouraging the habit -- younger people, in particular, give up smoking when prices, via taxes or otherwise, go up -- and that reduces the tax pool and collections.

So when the cigarette taxes fall short of original projections, says NTUF, lawmakers look to other tax sources to continue to fund the programs the tax was to support and/or avoid budget cuts.

"Ultimately our research shows that the downsides of punitive fiscal policy and reactive budget management are present no matter the political convenience of a particular tax," said Oprinescu.