The controversy over how and which groups the Internal Revenue Service targeted in assessing applications for nonprofit status is heading to court.

Maryland Democratic Rep. Chis Van Hollen, the ranking member of the House Budget Committee, will be the lead plaintiff in a lawsuit expected to be filed today in federal district court challenging the IRS' interpretation of the law that governs the tax status of social welfare organizations.

UPDATE, 2 p.m. Aug. 21: It's official. The lawsuit has been filed with the U.S. District Court for the District of Columbia. You can read the press release issued by the groups upon the filing, as well as check out the petition itself.

The groups who in the 2010 and 2012 election cycles applied for 501(c)(4) nonprofit status are at the heart of a Treasury Inspector General for Tax Administration (TIGTA) report and the subsequent and continuing Congressional inquiries into whether the IRS improperly and inordinately hassled them on the basis of their political leanings.

The initial charges were that the IRS focused only on Tea Party and other similar conservative groups. Additional Capitol Hill testimony and release of more unredacted documents show that progressive and liberal groups also received added IRS scrutiny during the application process.

Primarily vs. exclusively: Van Hollen and the campaign-finance watchdog groups Democracy 21, the Campaign Legal Center and Public Citizen say the whole mess could have been avoided if the IRS had just followed the law.

They're going to court to make the IRS do just that.

The heart of the issue, and now that's has been raised by several members of Congress as well as some media outlets, is the IRS decision to use "primarily" instead of "exclusively" as the standard for granting groups' 501(c)(4) nonprofit requests.

If the IRS had simply followed the law, say Van Hollen and others, we wouldn't be bogged down -- we are now at Day 104 of the IRS scandal per TaxProf Paul Caron's count -- in this tax and political mess.

Here's how Van Hollen, appearing on MSNBC's Jansing & Co. this morning (and yes, that image below is crooked and a little blurry because I snapped it off my TV screen with my phone), explains it: 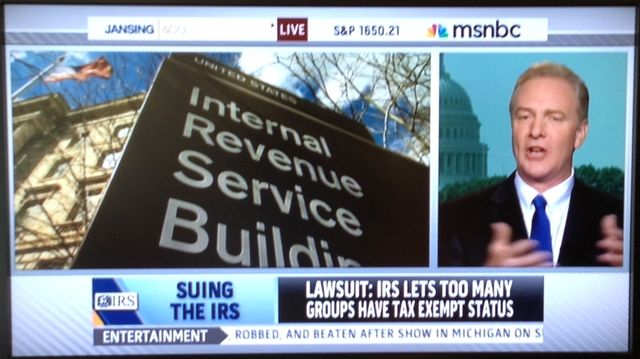 "This is really important. The issue is this. Under the current law, the way the law is actually written, the IRS is only supposed to grant what's known as 501(c)(4) tax exempt status to organizations that are exclusively involved in social welfare activities. So they should not be under the statute involved in political activities.

What's happened is that lots of organizations have begun to use this 501(c)(4) status to funnel millions of dollars into political collection campaigns. … It has happened on both sides. At the federal level you've had political organizations involved both on the side of Mitt Romney and on the side of President Barack Obama. … If you want to engage in that kind of political activity, the law has a clear way to do it. There's another [law], section 527 of the IRS code, [that] says you can spend as much as you want [under] the Supreme Court decision in Citizens United, but, and here's the key, it's required you disclose, that you tell the public, that the public know who is funneling millions of dollars into these political campaigns.

I think that everybody agrees, at least most people agree, that the health of our democracy depends on the public having that kind of information. You should not have millions, in fact hundreds of millions, of dollars of secret money flowing into political campaigns."

Acting IRS chief Danny Werfel has said he's is working with Treasury and IRS staff on this exclusive vs. primary matter. Several lawmakers also plan to or have introduced legislation to clarify (reclarify?) the existing law.

But given all the other issues on IRS radar and that Congress can't seem to bring itself to pass much these days, the Van Hollen et al lawsuit is probably the most expedient way to deal with this matter.