Werfel was a last-minute addition to the July 30 opening day itinerary at the IRS Nationwide Tax Forum in Grapevine, Texas, in the Dallas-Fort Worth metroplex.

He received applause from the tax professionals that filled the ballroom. That was probably the most welcome public appearance he's made since taking over as the temporary IRS chief specifically to help it deal with a variety of missteps and public and Congressional outrage.

"We have improved international tax compliance and modernized our technology in order to improve the filing experience," he said. "Another example involves our work on identity theft and refund fraud."

Full cost of budget cuts: But he quickly segued into how those successes could be threatened by proposed budget cuts.

"I believe the state of the IRS budget is an issue that requires some significant time to assess," Werfel said. "Recently, questions were raised about our budget in reaction to recent Treasury Inspector General for Tax Administration reports regarding IRS expenditures on conferences, training and travel, and some have suggested that deep budget cuts across the IRS are now appropriate." 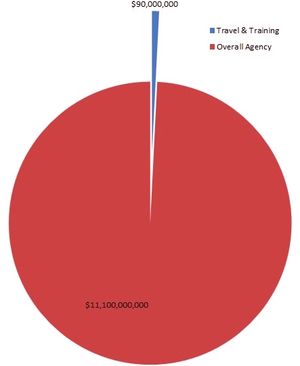 "First, the vast majority of the activity in question has been stopped under new robust policies that are in place," said Werfel. "During the last three years, the IRS has limited employee travel and training to mission-critical projects. We estimate that by the end of this fiscal year, training costs will have been reduced by 83 percent and training-related travel costs by 87 percent since 2010."

Plus, Werfel noted, the agency's travel and training budget now is only a small part of the overall IRS budget.

How small? Around $90 million for travel and training vs. a total IRS budget of $11.1 billion.

Yep, as the pie chart at right shows, that's a pretty miniscule slice.

So the question then becomes, said Werfel, does the history of past ill-advised training and travel expenditures justify making significant reductions to the wider circle of IRS expenditures, which involve core operations of enforcement and collection?

The House Appropriations Financial Services and General Government Subcommittee earlier this month voted to cut the IRS' fiscal year 2014 budget by 24 percent from 2013 levels. The reasons for reducing the agency's available funds were all directly tied to recent agency problems, such the aforementioned costly conferences, questionable training films and inappropriate targeting of certain groups applying for tax-exempt status.

"For every dollar the IRS spends, the return on investment is more than 4-to-1," said Werfel. "So there is a certain level of risk to the IRS' ability to generate the same amount of revenue for the government as in the past."

He also warned that IRS budget cuts will adversely affect taxpayer service, a message again directed as much at Representatives and Senators more than 1,300 miles away as to the tax professionals who packed the meeting room.

I know Washington, D.C., is a long way from the Lone Star State and Werfel is a measured and somewhat soft-spoken man, but I do hope Congress heard his latest message.