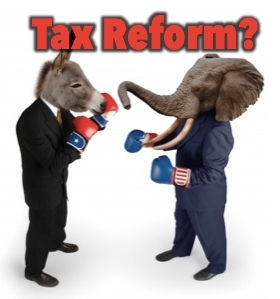 2013 is half over, but some folks are holding onto the hope that tax reform can be accomplished this year.

I am not among them.

The closer we get to the 2014 election year, the harder it will be to make substantive tax changes that will tick off both lobbyists who fund campaign efforts and the voters who will have the final say as to who goes or returns to Washington, D.C.

But the Representatives and Senators who head the Congressional tax-writing committees are committed to putting on tax reform show.

In one case, it's a literal road show.

Baucus and Camp headed first to the Maplewood, Minn., headquarters of global conglomerate 3M. The second stop was at the family-run Baldinger Baker in St. Paul.

At both locations (and future tax reform tour stops yet to be announced), the lawmakers are looking for suggestions as to how to re-do the country's tax code.

Trying to trim the tax code: Camp's Ways and Means Committee already has asked John and Jane Taxpayer for their thoughts on tax reform. It divided the tax code into 11 areas and solicited comments that were put into working papers for the House tax-writing committee members to use.

On the Senate side, Baucus and the Finance Committee's ranking Republican Orrin Hatch of Utah are seeking input from their colleagues as to what tax breaks should remain in the Internal Revenue Code. Essentially, they want to start with what they call a blank slate.

The Senate tax-writers acknowledge that stripping the tax code bare will be, well, impossible. In the Dear Colleague letter they sent to fellow Senators, they acknowledged that, "Indeed, we both believe that some existing tax expenditures should be preserved in some form."

But, added Baucus and Hatch, the tax code also is "littered with preferences for special interests."

In case the tax reform tour doesn't make it to your town -- future stops have yet to be announced -- you still can let Washington know what changes you would make to the Internal Revenue Code.

Be sure to tell the Congressmen what you think. And the ol' blog's readers and I would like to hear them, too, so we'd appreciate it if you'd also leave your tax reform thoughts in the comments below.

More me talking taxes: Tax reform also was a topic last week at my other tax blog.

As I noted in Senators seek tax reform 'blank slate,' the Baucus and Hatch hope to do away with most of the tax breaks now in the code in exchange for lower tax rates.

They also are asking their colleagues to provide persuasive evidence as to why any tax break should stay.

And they will give added weight to proposals that have bipartisan support. Good luck with that!

A tax break that always gets a lot of attention, including last week at my other tax blog, is the Earned Income Tax Credit (EITC).

Opponents of the EITC say it is abused by taxpayers who lie about meeting the claim requirements and should be removed from the tax code. Supporters say it must stay on the books because it's a crucial way to provide help to the working poor.

Now a liberal think tank has weighed in, noting that hat the EITC, along with the refundable portion of the child tax credit, are key to helping U.S. military families make ends meet.

You can find my additional tax thoughts at Bankrate Taxes Blog, usually on Tuesdays and Thursdays, although last week's 4th of July celebrations shifted the publication days.

But no worries. If you miss them there on whatever day they run, you can find a summary (and links) here the following weekend ... or soon thereafter.