Fear you might be a tax ID theft victim? Here's what to do

Don't carry your card with you in case your wallet or purse is stolen.

And don't give your Social Security number out unless it's absolutely necessary.

Those are a couple of tips in the Internal Revenue Service's various YouTube videos about identity theft. 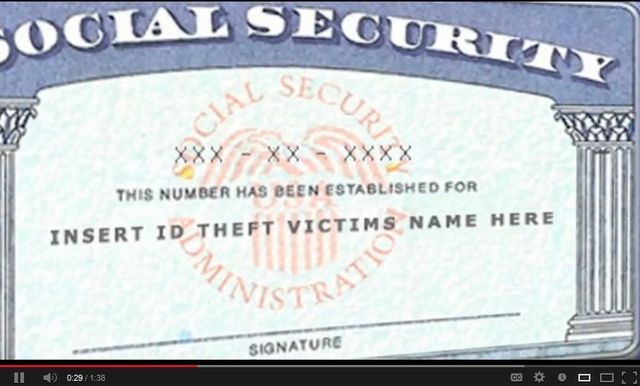 Click image (or link) to view IRS' "Protecting Yourself From Identity Theft" video.

Too bad the IRS didn't follow its own advice.

The erroneous tax ID disclosures happened during a routine transfer of data from political groups' public filings to a website where the information could be viewed by anyone who wanted to check on their activities.

Luckily for the IRS, it was Public.Resource.org, an independent nonprofit dedicated to transparency of public documents, that discovered that the Social Security numbers of "tens of thousands" of donors to Section 527 nonprofit political groups were accessible.

How did that happen? Apparently the IRS didn't redact the data when posting the groups' filing information to a public online database.

"This Section 527 database is an essential tool used by journalists, watchdog groups, congressional staffers, and citizens," said Public.Resource.org in a statement detailing its discovery of the tax ID numbers. "While the public posting of this database serves a vital public purpose (and this database must be restored as quickly as possible), the failure to remove individual Social Security numbers is an extraordinarily reckless act."

The good news is that the ID info was exposed for "only" about 24 hours. But we all know how quickly criminals can act.

After being notified by the records watchdog group, the IRS said it was "assessing the situation and exploring available options."

I'm presuming -- hoping -- that one of the IRS options/actions is letting the affected 527 groups know of the screw-up and those organizations are then contacting all their donors so they can take follow-up steps in case their Social Security numbers were among those temporarily exposed.

Taxes and ID theft: If you ever suspect you're a victim of identity theft, you can take some steps to limit potential damage to your good financial standing.

Both the Department of Education and Federal Trade Commission list the steps you can take, such as placing a fraud alert with the three national credit reporting companies and agencies and closing accounts that you know or suspect might be compromised.

The IRS also has a special identity theft Web page with links to other information, both within the agency and outside resources, about coping with identity theft.

ID theft and other storms: Given the damage that identity theft can cause, it's no surprise that the storm of concern over the IRS' leaking of tax IDs was one of the topics I examined last week at my other tax blog.

But there also were literal storm clouds with tax implications last week. On the meteorological front, Tropical Storm Chantal fizzled out and that was good news on several fronts.

Folks who might have been in Chantal's path could relax. And the unexpected lull gave them, as well as everyone in prime hurricane country, time to make storm plans, both physically and financially, before Mother Nature gets cranky again.

You can find my additional tax thoughts at Bankrate Taxes Blog, usually on Tuesdays and Thursdays.

But if you miss them those days, no worries. You can find a summary (and links) here the following weekend.