Tropical Storm Chantal, the third named system of the 2013 Atlantic hurricane system, is churning toward the United States.

Homeowners, especially those with coastal properties, are keeping an eye on the system.

But tax collectors also keep close watch on tropical storms because especially destructive ones cost onto only the homeowners, but local governments' treasury balances.

The most recent example is in New Jersey. Tax assessments on more than 40,000 properties in the Garden State are down by $4.3 billion because of damage caused by Superstorm Sandy. 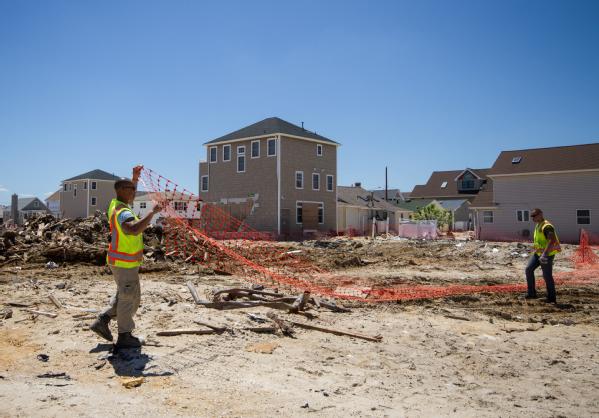 Ortley Beach, N.J., June 4, 2013 -- Workers wrap up the day by enclosing a demolition site in Ortley Beach of homes too damaged by Hurricane Sandy to be saved. Photo by Rosanna Arias/FEMA.

That hit to New Jersey property tax rolls was calculated by the Press of Atlantic City, which acquired the previously unreleased figures from the state Department of the Treasury via an Open Public Records Act request.

Storm damages homes, tax values: The reductions, according to the newspaper, were made in the months after the storm as the Division of Taxation created a system for tax assessors in the hardest-hit communities to use that would help track losses to ratable bases.

Through the spring, the state compiled that data into one document to help analyze which local governments would see their budget revenue be most affected by the storm. The storm affected assessments in all but three of the state's 21 counties.

The figures, says the Press, represent reductions on properties that could not be immediately repaired and will therefore be valued less for 2013 tax purposes.

The good news for the property tax collectors and mixed news for the real estate owners is that the drop in assessed taxable value is for most just temporary.

"If they got a reduction, and if they made repairs, they could end up going back to full value at the start of the year," George R. Brown, Cape May County's tax administrator, told the newspaper.

Prepare for potential damage: As the 2013 hurricane season progresses, storm activity likely will increase. So now is the time to prepare.

As you make your physical and financial disaster preparations, make sure a property inventory is part of your plan. This written and photographic record will help you when you make insurance claims.

And the post-storm photos also could help show your tax collector that your property tax bill needs to be adjusted downward until you get your home repaired.