Entrepreneurs, taxes and tunes, aka fun at the IRS Tax Forum

And there were no empty seats in the ballroom for the lone presentation of 2013 tax law changes.

But of the 13 regular IRS Nationwide Tax Forum seminars I've attended over the last two days at the Gaylord Texan in Grapevine, the most well-attended have been on business expense substantiation and Schedule C challenges.

Is all this interest an indication of the growth of entrepreneurialism in today's economy?

Whatever the reason, I've made a note to expand on the topic of sole proprietorship taxes when I get back home and sort through all my notes. In the interim, these previous posts should help slake your thirst for tax information about being your own boss:

Now for the really important stuff, my various observations on the Tax Forum and things tangential to it. Here goes.

He pointed out how resilient the organization has been in the face of emerging challenges and constant change. He lauded the commitment of career IRS employees. And he specifically noted Texans' way of showing their pride in what they do.

Werfel said he noticed upon arrival at the Dallas IRS office that all the staff nameplates also were adorned with an image of the Lone Star State. "I live in Virginia and I have never had a picture of the state of Virginia on my name placard," he said. "I love when people are proud of that they do and where they are from." 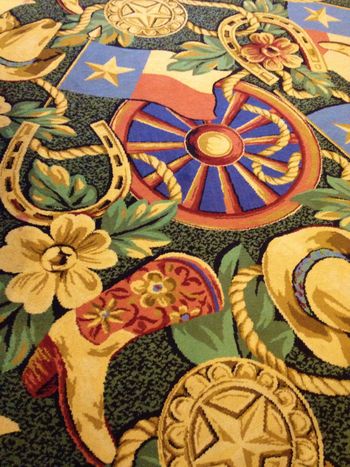 I sure hope Werfel got a look at the carpeting in the convention area where the Tax Forum sessions are held. It's a wall-to-wall tribute to all things Texas!

Give me an I-R-S: Last year, I attended the Tax Forum in San Diego, which started just as Comic-Con was ending. There are no superhero costumed folks here in North Texas, but there are plenty of young women in uniform, cheerleader uniforms to be specific.

Yes, these enthusiastic promoters of school spirit, here for a National Cheerleaders Association camp, are mingling with all us tax geeks. The young women move in groups and all wear distinctive bows bearing their schools' colors in their hair.

I am having serious high school flashbacks!

Tax, or not, tidbits: It's good to be around folks who, while they might not love the IRS, aren't politically motivated in their attitudes. They just want the agency to operate more efficiently so they can do better jobs of helping their clients.

The Taxpayer Advocate Service, a regular presence at the Tax Forums for all the years I've attended, didn't make it to this event. Sequester perhaps?

Members of the Taxpayer Advocacy Panel, however, are here. This is a great group of volunteers who work, as their motto says, to improve the IRS.

The Treasury Inspector General for Tax Administration presentation on what the tax watchdog does and how tax preparers can help included two videos in which TIGTA employees participated. There were no castaways, pointy-eared Vulcans or line dancers.

Why do people stop to talk at the bottom of escalators? If we all just piled into them would they move?

Not to be the classroom noodge, but if you plan to talk during a seminar, please sit at the very back of the room.

Tax tunes, day two: And now it's soundtrack time. Here's what we were treated to between seminars:

And just after the day's last session and the announcement of the reception location, we were blasted by I Feel Good by James Brown. All of us in the meeting room, including the IRS moderator and topic presenter, cracked up.