The U.S. tax system is not very attractive

How attractive is the Unites States tax system? Not very, according to a recent analysis by two German economists.

It purports to quantify countries' tax environment attractiveness. And the U.S. system is pretty darn ugly. Of the 100 national tax systems analyzed by the duo, the United States ranked 94th. And that sad number of 94 is this week's By the Numbers figure.

The table below (a larger, clearer version can be found on page 45 of the report) shows all 100 rankings. So how did America end up with such a low ranking? Keller and Schanz designed a measuring system that produces an equally-weighted sum of 16 different tax factors for each of 100 countries between 2005 and 2009.

Among the factors are the statutory rate, personal income tax rate, taxes on a variety of investment income, loss carry back and carry forward rules and a country's tax treaty network. All 16 components are covered in Table 1 (on page 43) in the report.

Basically, the closer the Tax Attractiveness Index is to one, the more attractive is the country's tax environment.

But, as The Joy of Tax Law blog notes, the table listing of tax attractiveness is alphabetical order, so it's not very user-friendly for comparison purposes.

"A simple rule-of-thumb is that any score about .6000 is relatively good and any score below .4000 suggests a country is shooting itself in the foot," notes JoT, which also created these easier-to-read top and bottom tax attractive lists: 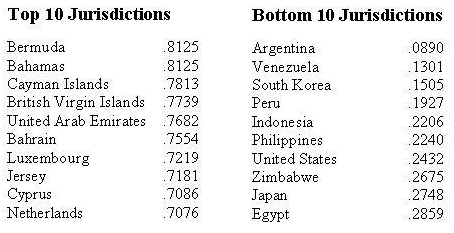 Obviously, any analysis is limited by the data it uses. And this study's authors note that "by comparing the Tax Attractiveness Index with the statutory tax rate, we reveal that even high tax countries offer favorable tax conditions. Hence, the statutory tax rate is not a suitable proxy for a country's tax climate in any case since countries may set other incentives to attract firms and investments."

But, and this might be the sports fan in me, I always get a kick out of looking at rankings.

The chairmen of the Congressional tax-writing committees are hoping they can get their colleagues to agree on ways to remake the U.S. tax code into a more attractive set of laws. I'd love to hear your analysis of this study and suggestions for tax reform. Just drop me a note in the comments section below.

In a competitive global economy, jobs and capital flow to jurisdictions with better tax law. Traditionally, this process of "tax competition" has benefited the United States, but there is growing evidence that America is falling behind. Nations around the world are lowering tax rates and reforming their tax systems. Indeed, nine countries that were part of the former Soviet Bloc have adopted versions of the flat tax. These pro-growth reforms are yielding impressive results and should be a road map for U.S. policymakers.

The Fair Tax is even more compelling. This tax system is based on consumption entirely. There are no forms to fill out, whatsoever. The Fair Tax abolishes all federal, personal & corporate income taxes, gift, estate, capital gains, alternative minimum, social security, Medicare, & self employment taxes. It replaces these taxes with a simple retail tax from 15-20%.

Unlike the current system, which discriminates based on the source, use, and level of income, a fair or flat tax treats all taxpayers equally, fulfilling the "equal justice under law" principle etched above the main entrance to the U.S. Supreme Court building.

And unlike the current system, which punishes people for contributing to the nation's wealth, a flat or fair tax would lower marginal tax rates and eliminate the tax bias against saving and investment, thus ensuring better economic performance in a competitive global economy.

Not only is our tax system not attractive, we also work more hours than other industrialized countries and we have less vacation days than the others- including China! Nice post.