The eyes of the tax world (OK, maybe just the eyes of tax geeks like me) have been focused on Washington, D.C.

That's where the continuing Congressional hearings into the Internal Revenue Service's myriad missteps are playing out, as well as the Supreme Court's just announced Defense of Marriage Act ruling and the possibility hope that the tax-writing committees soon take up comprehensive tax reform.

But a lot of tax action has taken place in the state capitals across the country. 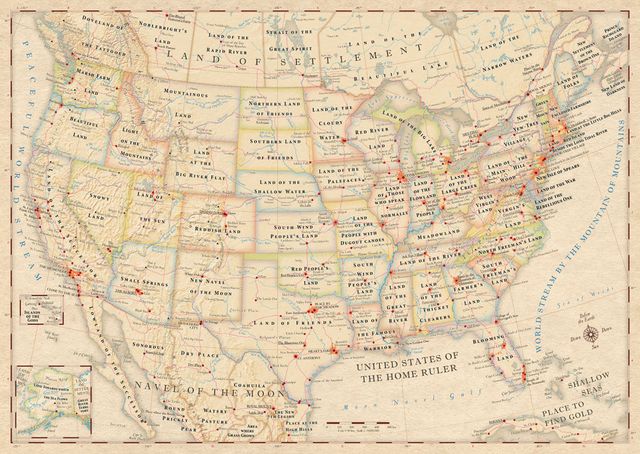 The Atlas of True Names from Kalimedia.com shows the etymological roots, or original meanings, of the familiar terms on today's maps of the World, Europe, the British Isles, Canada and, as shown above, the United States of America.

Stateline, the news service for the Pew Charitable trusts, has been tracking the more-local tax action. They include new levies on things such as telephone ring tones, digital audio book downloads and music, as well as tax rate adjustments to gasoline, sales and property taxes.

Here are some of the tax laws that Stateline says taxpayers in several states will see take effect on July 1, the beginning of the new fiscal year in most states.

Digital taxes: The most innovative new taxes, says Stateline, are in cyberspace.

Minnesota is leading the way in Internet-related taxes. It will next month impose a 6.875 percent sales tax on the purchase of digital audio works like songs, readings of books, speeches, ring tones or other sound recordings.

Iowa taking similar tax action, declaring that is has a "sales tax nexus" for retailers conducting business in the state via Internet sales. The Hawkeye State will impose its 6 percent sales tax those transactions beginning July 1.

These two states and Maine are the latest in about a dozen states that have enacted some type of Internet tax, according to Stateline.

As for Maine, its 5 percent Internet transaction tax law won't take effect until 90 days after the legislative session ends. That had been expected by June 19, but budget wrangling has pushed that date back.

The states where gasoline taxes will increase are California, Maryland, Virginia, Kentucky, Connecticut and Vermont.

Virginia will raise its diesel fuel tax on July 1 and will tie gas taxes to that fuel's prices and inflation, as well as increase its motor vehicle sales tax from 3 percent to 4 percent.

The state also will now charge a $64 annual fee on hybrid and alternative-fuel vehicles to make up for the gas taxes their drivers don't pay because the vehicles are more fuel-efficient.

In addition, the Areas of Northern Virginia and the Virginia Beach metro area will see local sales taxes go from 5 percent to 6 percent. The rise in the sales tax rate for residents in the rest of the Old Dominion will be smaller, going from 5 percent to 5.3 percent.

A variety of other tax hikes: Other notable state July 1 tax hikes cited by Stateline include:

A few tax cuts: Some states, however, were able to cut a few tax rates. Those reductions all will take effect July 1.

Arkansas decided to forgo $2.5 million so that it could offer its residents a one-tenth of 1 percent cut in the state's income tax.

Tennessee's sales tax on food will drop from 5.25 percent to 5 percent.

And in an effort to attract more entertainment production dollars, Hawaii will begin offering a larger tax credit for filmmakers from 20 percent to 25 percent in rural counties and from 15 percent to 20 percent in the island state's more populous counties like Honolulu.