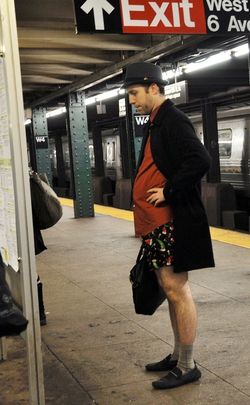 Tax collectors worldwide are an unpopular group, but a group of Italian businessmen found a unique way to express dissatisfaction with their nation's collection agents.

They dropped their trousers.

The five men, partially dressed in shirts, socks and shoes and their underwear, gathered this week outside the parliament building in Rome carrying signs that read "You are killing thousands of jobs."

They and other members of the business lobby Coba Imprese want to abolish Equitalia, the agency that collects back taxes and fines.

As Italy has attempted to get tough with tax evaders in recent years, Equitalia has become widely unpopular. In 2011 a package sent to a tax collection office in Rome exploded, injuring the director.

But this week's bare-legged protesters say that Equitalia has gone beyond just the hassle of collecting taxes.

Businesses for almost two years have been struggling to survive Italy's recession. During that time, tax protesters say that Equitalia has hounded many of the country's indebted business owners.

And that aggressive tax collection approach, contend the protesters, has led to deadly results.

"In the past 18 months, 162 businessmen have committed suicide because they have ended up in the teeth of this agency," said Cobas Imprese president Giuseppe Graziani.

The anger and frustration is understandable.

However, it's not clear, at least to me, why the protesters decided that going sans pantalones was the best way to get their message across.