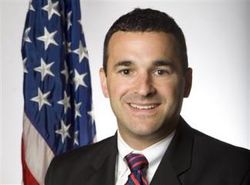 If you're planning on dropping Daniel Werfel a note about the Internal Revenue Services' recent troubles, be sure to address him correctly.

No, he hasn't been fired or suspended. He's got a new title.

But regardless of what you call him, IRS employees will still call him boss. Despite the title change, Werfel will continue to run the agency.

The new moniker isn't just cosmetic. It's mandated by the Federal Vacancies Reform Act of 1998, which details how certain presidentially appointed, Senate-confirmed offices may be filled.

IRS commissioner is one of the positions under the Act's purview. It states that an acting commissioner can serve for only 210 days after the vacancy is created.

So Lew got proactive and made Werfel's job change effective June 7.

"Mr. Werfel will continue to lead the IRS," Lew wrote to Democratic and Republican leaders on the Senate Finance and House Ways and Means committees. "He will serve as the senior most IRS official and, pursuant to existing IRS Delegation Orders, will have the authority to perform all the delegable duties and responsibilities of the Commissioner of Internal Revenue."

When President Obama nominates a new IRS Commissioner, Werfel will again become the agency's Acting Commissioner until the new candidate is confirmed.