Sometime this month, the U.S. Supreme Court will decide two gay marriage cases, California's Proposition 8 legalizing same-sex marriages in that state and the federal Defense of Marriage Act, or DOMA, which defines marriage for federal purposes as being the exchange of vows between one man and one woman. 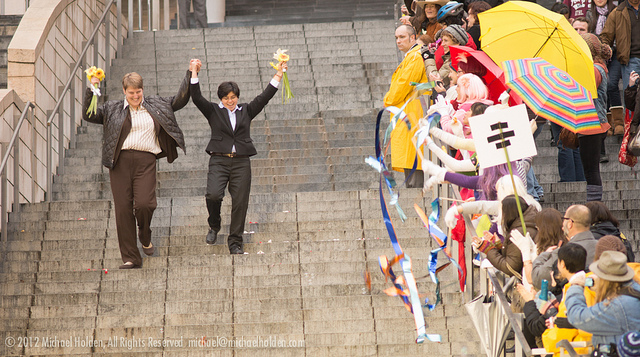 One of the 138 same-sex newlywed couples who were greeted by a cheering crowd after their weddings at City Hall in Seattle on Dec. 9, 2012, the first day that same-sex couples could marry in the state of Washington. Photo by Michael Holden via photopin cc

The justices' opinions will affect the hundreds of thousands of gay couples who, under their states' laws, are married or who hope to one day marry.

Most of those couples want to exchange vows because they love one another. But, as a tax geek bride who pushed her wedding date into a new year partially for tax reasons, we can't ignore the tax consequences, good and bad, of being married in the eyes of the Internal Revenue Service.

A 2004 Government Accountability Offices, or GAO (which until July of that year was called the General Accounting Office) analysis found there were 1,138 federal laws in which marital status is a factor. Of those statutes, 179 were part of the Internal Revenue Code.

Both the overall number of laws and the number of tax-specific provisions cited in 2004 were an increase from the GAO's 1996 look into the matter following the enactment of the DOMA. Back then, the GAO counted 1,049 total marriage-related federal statutes and 59 tax provisions.

So in recognition of the increase in marriage-related tax laws, which I'm sure have grown even more since the GAO last looked nine years ago, and the impending Supreme Court ruling on DOMA, 179 is this week's By the Numbers figure.

For better or worse, in taxes too: Most married couples find that they benefit from federal tax laws when it comes to their joint filing status. Some heterosexual couples, however, find that their particular situations mean the tax code costs them.

It's that same marital tax treatment, for better or worse, that same-sex couples are seeking.

And while most folks, regardless of their sexual orientation, will deal with the IRS on relatively routine matters, such as filing status and tax credit and deduction claims, marital status concerns also come into play when there are estate and gift tax considerations.

When your spouse is the same sex as you, estate tax planning and costs can increase substantially.

In fact, if was those differing estate tax costs for a lesbian married couple that prompted the filing of the DOMA lawsuit now before the Supreme Court.