The tax cut revolution got its start 35 years ago today when California voters approved Proposition 13. 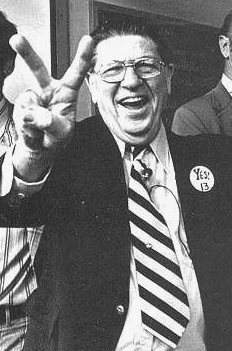 With that tax legacy, 35 earns this the latest By the Numbers honor.

Tax limits then, now and in the future: Five years ago, a poll of Golden State voters found that Prop 13 was still popular.

In 2013, the tax limitation still has the support of most Californians ... to a degree.

A recent survey by the Public Policy Institute of California (PPIC) found that Proposition 13 remains popular, with 58 percent of adults and 61 percent of likely voters saying it has been mostly a good thing for the state.

But 58 percent of Californians also favor a split-roll property tax that lets homeowners keep the tax cap while opening up business properties to possibly higher taxes.

"Californians remain steadfast supporters of Proposition 13 tax limits on the 35th anniversary of its passage, but they are open to some change," said Mark Baldassare, president and CEO of the nonpartisan nonprofit think tank. "Most support altering the provision that calls for the same treatment of residential and commercial property taxes. They are a lot less willing to lower the vote requirement to pass a local special tax."

The California Assembly last month looked at a measure that was a step toward taxing different kinds of property differently. That bill, AB 188, stalled. And a true commercial/residential split tax roll change would require voters approve a constitutional amendment that changes Proposition 13's limits.

Despite the vote last year to increase some California taxes, changes to the granddaddy of tax limitations isn't likely to be an easy sale.

The California Taxpayers Association, an anti-tax advocacy group popularly known as CalTax, dismissed the PPIC poll. CalTax argues that poll use of the phrase "current market value" did not "state that the proposal in question would be a massive tax increase on businesses, and did not include any context that would let respondents know that such a tax increase would result in job losses, higher consumer costs for goods and services, and higher rents for many Californians."

CalTax also released on this 35th birthday of Prop 13 a review of the anti-tax measure, detailing its history and the reasons why the group believes the current property tax limits should remain in place.

Pros and mostly cons: As a homeowner in a state that depends in large part on property taxes because Texas has no income tax, I totally understand the frustration and anger that accompanies annual property tax bills.

But I also believe that flat and immovable limits to a tax, particularly when set in a different time many years ago, can create their own set of new problems for states and their residents.

Noah Glyn and Scott Drenkard of the Tax Foundation say that that Prop 13 has failed to reign in California's public sector.

What say you, especially you California readers who are living with Prop 13? Are you among the majority that wants to keep it? Or do you favor splitting the business and residential tax limits? Would you ever vote to scrap Prop 13 altogether?

I'm against changing Prop 13 in any fundamental way at this time for multiple reasons.

1) The real estate market is just starting to recover, so having rates bounce up to market might force some people with less income that own their homes to sell, for example people living off of social security. That will drop home values again, causing more issues with real estate.

2) It would force many senior citizens in certain communities out of their homes. I know quite a few in my area that would in no way be able to afford it when their property tax goes from $700/yr to $11,000/yr. (That's a realistic number in this area. Prices have skyrocketed in the last 30 years. The previous owner of one of my neighbors homes was paying $550. The current owner is now paying in the $11,000+ range based on their purchase price.)

3) Despite what anyone says about how this only impacts homeowners and businesses (not you), this impacts renters to a large degree. If landlords see their property taxes double(or maybe go up 5-10x), that will impact rents. It's hard enough for lower income earners in California. If their rents go up, that's always a problem.