Lois Lerner, IRS tax-exempt office chief, takes the Fifth before House committee: 'I have not done anything wrong'

The Internal Revenue Service executive whose apology blew the investigation into the agency's improper use of screening criteria for tax-exempt applications had a chance to explain things today. 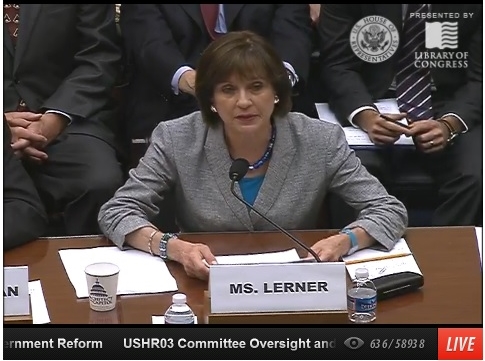 Lerner, Director of Exempt Organizations, was scheduled to testify today before the House Oversight and Government Reform Committee on what she knew about IRS employees in the Cincinnati field office using terms such as Tea Party in pulling applications for closer review.

People both inside and outside the beltway have questions as to what Lerner knew about the process and when she knew it. Some lawmakers on both sides of the aisle have called for her to resign.

No doubt the Department of Justice investigation into the IRS matter was a key reason Lerner refused to testify.

Some also speculate that Lerner's decision also was influenced by House Speaker John Boehner's statement last week that he wanted to know "who's going to jail" over the bungled review process.

Comment, but no questions: So Lerner decided that, at least for now, it's in her best interests to keep her mouth shut.

But she also knows she's taking a public perception risk. She told the panel:

"My professional career has been devoted to fulfilling the responsibilities of the agencies for which I've worked and I am very proud of the work I have done in government. … Members of this committee have accused me of providing offering false information when I responded to questions about the IRS processing of applications for tax exemption.

I have not done anything wrong.
I have not broken any laws.
I have not violated any IRS rules or regulations.
And I have not provided false information to this or any other congressional committee.

Because I'm asserting my right not to testify , I know that some people will assume that I have done something wrong. I have not."

"You don’t get to tell your side of the story and not be subjected to cross examination," said an agitated Gowdy. "That's not the way it works."

Ah, but it is the way it works. Committee hearings, while providing members of Congress with many powers, are not courtrooms.

Issa mentioned the possibility of Lerner testifying if she is granted some form of immunity before eventually releasing her subject to recall before the committee.

Committee members also used the time-tested trial technique of phrasing a point, in this cas a political supposition, as a question that is essentially unanswerable by the witnesses.

And time conveniently ran out in several instances just when a rousing point was made.

Gone but not forgotten: Although Lerner wasn't in the hearing room, her name and role in the screening of Tea Party and other conservative groups' tax exempt applications was cited frequently by panel members in their questions to the remaining witness.

Wolin and new IRS Acting Commissioner Daniel Werfel likely will be back before this panel in the coming weeks to discuss progress made in changing the way applications for 501(c)(4) tax-exempt status are processed.

And I suspect Lerner will get an, uh, invitation to give her side of the story then, too. We'll see if circumstances have changed to a degree that she'll accept.

It is good to see that the IRS is having their feet held to the fire on this. They have for years tested their fences to see how far they can go. Well I guess they found the limit. I hope that this shows them that they are not as powerful as they would like to believe they are. I have been on the receiving end of the IRS and I hope that they get treated as poorly as I was treated by them.