Many of my friends are at Kentucky Derby parties today. It's not so much that they are horse or horse racing folks. They just want to get together and have an excuse to put on a fancy hat. I'm talking about both male and female friends here.

But there are those for whom betting is the best part of the Derby or any race. 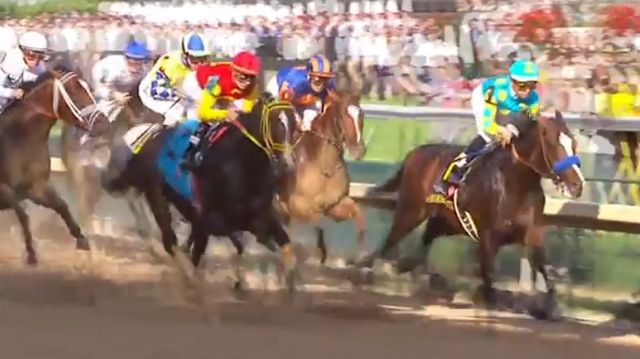 Horse racing folks, however, say the amount of betting has declined, in part because of the Internal Revenue Service requirements on reporting race winnings.

In a letter to the IRS, the Washington, D.C., law firm Davis & Harman LLP explains:

"In part, due to current tax laws, U.S. wagering on parimutuel horse racing has declined from a high of $15.18 billion in 2003 to $10.87 billion in 2012. The parimutuel horse racing industry -- representing nearly 1,000 off-track wagering service sites, as well as some 200 racetracks -- has lost market share as horseplayers migrate to other forms of gambling entertainment that do not withhold on winnings over $5,000. This migration is not because of a desire to avoid taxes, but because of over-withholding."

The firm, representing the National Thoroughbred Racing Association and the American Horse Council, is asking that for withholding and reporting purposes an "amount wagered" include the total amount bet by the winning bettor of the proceeds in the parimutuel pool.

Basically, argues Davis & Harman on behalf of its horsey clients, the current tax rules that apply to winning wagers on horse racing do not reflect appropriate or equitable withholding and reporting for the way most betting is done today.

Current wagering withholding law: Tax law now says that withholding is required if the wagering proceeds are more than $5,000 from "a wagering transaction in a parimutuel pool with respect to horse races, dog races, or jai alai if the amount of such proceeds is at least 300 times as large as the amount wagered."

The problem, says the firm, is that the law's interpretation of what is considered as the "amount wagered" doesn't take into account all the combinations a patron bets into a pool in an attempt to produce a winning ticket. The IRS now looks at only the cost of the one winning combination as the amount wagered for withholding and reporting purposes.

Davis & Harman suggests that, for example, if a bettor places 10 bets into a Trifecta pool on 10 different combinations of the three horses that will come in first, second, and third, the cost of all of those bets should be included in the amount wagered for purposes of withholding.

The letter (available via Tax Analysts; subscription required) offers examples of the current winning bet/withholding situation and how the firm recommends it be changed.

Assume an individual decided to wager a Trifecta (selecting the first-, second-, and third-place finishers in a race, in exact order). To improve his or her chances of winning, the individual selects a group of seven horses in the race and requests a "Trifecta box." By betting a box, the person wins if any three of the seven horses finishes one-two-three (in any order). A seven-horse Trifecta box involves 210 different mathematical combinations. If the person bets $20 on each combination, the total amount wagered is $4,200 ($20 x 210). After the race, the person held a winning ticket that paid $6,100 (which is odds of 305 to 1).

Under the current IRS withholding rules, the racetrack would withhold $1,520 since the rules treat the $20 paid for the one  winning combination as the only amount wagered. The withholding is computed as follows: $6,100 proceeds from wager less $20 amount bet equals $6,080 in winnings. The required 25 percent withholding would take $1,520 off the top.

The firm argues that the winner has really only won $1,900: $6,100 winnings less $4,200 wagered in total. So under current law, the current withholding system leaves the winner with a net of only $380, making the withholding rate 80 percent of the actual winnings.

Suggested wagering withholding changes: The more fair method, argues the law firm, would be for the IRS' payoff computations for the Trifecta detailed above to be changed to define the "amount wagered" as the actual dollars wagered by that person, or $4,200.

"The person may be able to get back the over-withholding...by claiming the balance of what was bet on the Trifecta as a miscellaneous itemized deduction on his or her tax return when it is filed the following year," according to the letter. "But withholding by this procedure takes that money out of the wagering cycle for a long time."

Overall IRS requested for guidance: The Davis & Harman letter is just one of many sent to the IRS as part of the agency's annual public comment solicitation of recommendations for its 2013-2014 Guidance Priority List.

The IRS uses the list to prioritize issues it will address through regulations, revenue rulings, revenue procedures, notices and other administrative guidance. The guidance is also used to clarify ambiguous areas of tax law.

I wish all those betting on today's Kentucky Derby good luck.

And I wish the same to Davis & Harman its horse-racing connected clients.

However, I'm not so sure that telling the IRS that tax withholding is one of the reasons that folks are deciding not to bet, at least not bet through legal channels that collect taxes off the top on winnings, is such a persuasive argument.

Run for the Roses betting update: The 139th running of the Kentucky Derby at Churchill Downs will have a field of 19 horses.

The Kentucky Derby official website offers live odds, as well as a way to bet on the race online.

As I type, folks feeling lucky have bet more than $9.9 million. (Update an hour before post time: Almost $25 million has been bet.)

The purse for the 1¼-mile race that will take about two minutes to complete is almost $2.2 million, with the winner to get $1.44 million of that.

The remaining Triple Crown races are The Preakness in Baltimore on May 18 and the Belmont Stakes from Elmont, N.Y., on June 8. The last horse to win all three races was Affirmed in 1978.

And if you're looking for some fun bets today, Richard Rosenblatt suggests:

Good luck with your picks and don't drink too many Mint Juleps!