Could the Internal Revenue Service's public image right now get any worse? Yes.

An IRS secretary in the agency's Lanham, Md., office has been charged with embezzlement.

Yetunde Oseni, 37, allegedly used an IRS-issued Citibank MasterCard to buy a wide variety of personal items during an almost four-year long buying spree. According to the court filing, Oseni had been given the credit card in order to buy supplies for her business unit in suburban Washington, D.C.

The alleged embezzlement was discovered during a routine audit of the IRS purchase card program by the Treasury Inspector General for Tax Administration (TIGTA).

The one bit of good news is that over the 46-month period cited in the criminal charge, Oseni only allegedly racked up a total bill of $8,515.

I'm not naming names or pointing fingers, but I know some folks who could easily put eight grand on a credit card in a week.

Plenty of improper purchases: The items, which federal prosecutors say were purchased on Amazon, included romance novels, food, children's books and videos, baby items, a Ginsu knife set, DVDs (including several seasons of "Big Love") and "other items not used by the IRS." 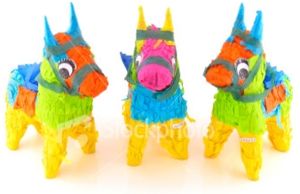 It also looks like there was a party to which we taxpayers who footed the bill weren't invited. Among the bought items listed in the complaint were a snow cone maker, hot air popcorn popper, cotton candy machine, two chocolate fountains and a piñata.

According to the complaint, each time Oseni allegedly made a personal purchase, she "submitted what appeared to be a legitimate invoice for legitimate office purchase on behalf of the IRS."

The Smoking Gun reports that Oseni is free on a personal recognizance bond. A hearing on the charge is scheduled for June 12 at the federal courthouse in Greenbelt, Md.

If convicted of the embezzlement charge, Oseni could face a maximum of 10 years in federal prison.