Apple lauded on Capitol Hill at hearing about its low U.S. taxes

The Internal Revenue Service and its leaders, past, current and now on administrative leave, got most of the public attention last week as Congressional hearings continued into how the agency screwed up reviews of applications for tax-exempt status.

The agency, according to a Treasury Inspector General for Tax Administration (TIGTA) report, used "inappropriate criteria" when employees placed conservative groups, notably those affiliated with the Tea Party, on a "be on the lookout" list when it came to determining whether the organizations should be given preferable tax status.

But there was another Capitol Hill look into taxes that didn't have anything to do with the IRS' current problems. 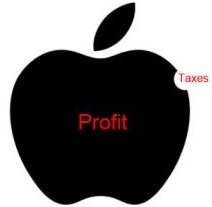 The Senate Permanent Subcommittee on Investigations released a report on how little tech giant Apple pays in corporate taxes on Monday, May 20. Basically, according to the Subcommittee, Apple "used a complex web of offshore entities – including three foreign subsidiaries the company claims are not tax resident in any nation – to avoid paying billions of dollars in U.S. income taxes."

The Subcommittee then followed that up with a hearing on Tuesday, May 21, where the head of Apple got his chance to explain how the company avoided U.S. taxes on $44 billion in offshore, taxable income between 2009 and 2012.

The gist of Apple CEO Tim Cook's testimony was that Apple has done nothing wrong. "We pay all the taxes we owe, every single dollar," Cook said. "We don't depend on tax gimmicks."

Call them what you want, Mr. Cook, but the fact is your company, like most other large corporations, use them. And they make a big difference on how much, or rather, little U.S. taxes the companies pay.

That's not to say you aren't well within your rights to do so. Even the IRS has always made it clear that taxpayers, individual and corporate, should pay only the taxes that they are legally required to pay.

So if you can find a loophole (or gimmick etc.) that's legal, then go for it. Your shareholders appreciate the effort. Heck, even Warren Buffett's company does all it can to pay as little as possible even as the Oracle of Omaha bemoans his own personally low income tax rate.

Following the letter, not the spirit of tax law: Still, it strikes many folks, especially individual taxpayers who feel like they pay way too much to the U.S. Treasury, as poor form when companies are able to essentially game the system.

Many Senators, however, apparently are not appalled. In fact, as the New York Times put it in comparing the tenor of the IRS and Apple hearings, "It is better to be a tax dodger than a tax collector."

Comedic newsman Jon Stewart, who should win the first Nobel Prize for cutting to the chase if those judges ever add that category, skewered the sycophantic Senators.

The lawmakers, one after another, fawned over Apple and its devices -- I'm talking products here, not tax avoidance techniques -- with several asking Cook how he thinks the corporate tax code should be changed.

Cook, citing what he called Apple's preference for simplicity, suggested a dramatic paring down of the tax code, or what Stewart termed taxcode nano. 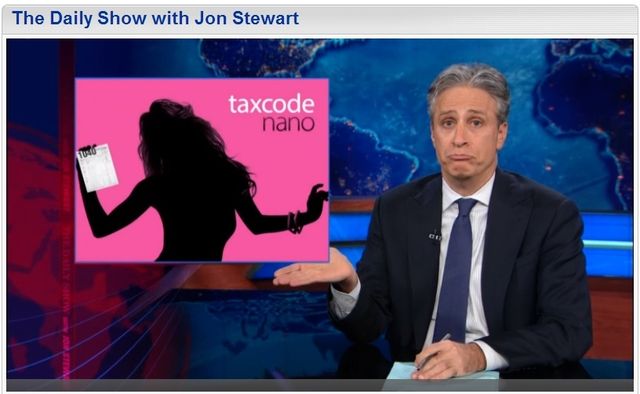 Click above image for the Apple tax segment video on the Daily Show.

Stewart then got the final shot (it is, after all, his show), noting that the offshore tax breaks that Apple used to its advantage "didn't get carved out by poor people."

"Our tax code is purposefully complex so that corporations with resources are the only ones who can find the buried goodies their own lobbyists have hidden in the labyrinth," said Stewart.

In the New York Times' Opinionator column, Steven Rattner took another look at the corporate tax dodge. He writes:

"As muddled and broken as the individual income tax system may be, the rules under which the government collects corporate levies are far more loophole-ridden and counterproductive.

That's not entirely Washington's fault. Unlike individuals, multinational corporations can shuttle profits — and sometimes even their headquarters — around the globe in search of the jurisdiction willing to cut them the best deal on taxes (and often other economic incentives)."

Chris Farrell starts with the obvious in his Bloomberg Businessweek piece: "The U.S. corporate tax code is a Byzantine mess." But, he says, corporate tax overhaul isn't in the cards.

Lauren Feeney at Moyers & Company notes that it's not just one bad Apple when it comes to very low tax bills paid by very large companies. She cites the Citizens for Tax Justice (CTJ) table shown below that lists 10 particularly aggressive companies that have reported that their U.S. tax-saving offshore profit holdings have grown by more than $5 billion each in just the past year. 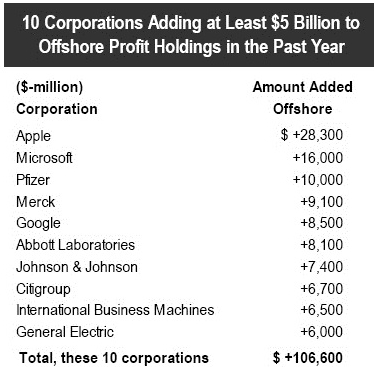 In fact, says CTJ, 92 Fortune 500 corporations boosted their offshore stash by more than $500 million each.

And Ezra Klein over at his Washington Post Wonkbook column says, "Forget trying to make Apple pay higher taxes. How about if we don't make them pay any taxes at all?"