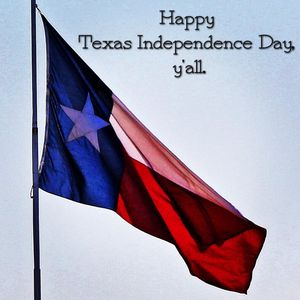 On this day in 1836, Texas declared its independence from Mexico.

Four days later, the new Texians at the Alamo didn't survive the siege by the unimpressed Mexican President Antonio López de Santa Anna and is troops.

We remembered, but didn't fare any better at Goliad. More than 350 Texas Republic soldiers who had surrendered there were massacred.

That really made us mad.

We Texans will commemorate the Battle of San Jacinto next month. But we joyously celebrate this day, March 2, 1836, that started it all.

It was that day 177 years ago that the attitude and independent streak for which Lone Star Staters are lauded or laughed at or denounced, usually depending on whether you're a Yankee or on your political persuasion (and that holds true within our borders, too!), was officially born.

I am proud to be a native of West Texas. And even when I get frustrated with my state's leaders, I generally love and appreciate the people of the state. That feeling was summed up years ago in a letter whose authorship has been roundly debated.

But the thing that all we Texans can agree on is the words' sentiment. So on Texas Independence Day 2013, I want to again share those thoughts.

Last year, I wrote a small piece about what it means to me to be a Texan. My friends know it means about damned near everything. Anyway, this fella asked me to reprint what I'd wrote and I didn't have it. So I set out to think about rewriting something. I considered writing about all the great things I love about Texas. There are way too many things to list. I can't even begin to do it justice. Lemme let you in on my short list.

It starts with The Window at Big Bend, which in and of itself is proof of God. It goes to Lake Sam Rayburn where my Granddad taught me more about life than fishin', and enough about fishin' to last a lifetime. I can talk about Tyler, and Longview, and Odessa and Cisco, and Abilene and Poteet and every place in between. Every little part of Texas feels special. Every person who ever flew over the Lone Star thinks of Bandera or Victoria or Manor or wherever they call "home" as the best little part of the best state.

So I got to thinkin' about it, and here's what I really want to say. Last year, I talked about all the great places and great heroes who make Texas what it is. I talked about Willie and Waylon and Michael Dell and Michael DeBakey and my Dad and LBJ and Denton Cooley. I talked about everybody that came to mind. It took me sitting here tonight reading this stack of emails and thinkin' about where I've been and what I've done since the last time I wrote on this occasion to remind me what it is about Texas that is really great.

You see, this last month or so I finally went to Europe for the first time. I hadn't ever been, and didn't too much want to. But you know all my damned friends are always talking about "the time they went to Europe."

So, I finally went.

It was a hell of a trip to be sure. All they did when they saw me was say the same thing, before they'd ever met me. "Hey cowboy, we love Texas." I guess the hat tipped 'em off. But let me tell you what, they all came up with a smile on their faces. You know why? They knew for damned sure that I was gonna be nice to 'em. They knew it 'cause they knew I was from Texas. They knew something that hadn't even hit me. They knew Texans, even though they'd never met one.

That's when it occurred to me. Do you know what is great about Texas? Do you know why when my friend Beverly and I were trekking across country to see 15 baseball games we got sick and had to come home after 8? Do you know why every time I cross the border I say, "Lord, please don't let me die in _____"?

Do you know why children in Japan can look at a picture of the great State and know exactly what it is about the same time they can tell a rhombus from a trapezoid? I can tell you that right quick. You. The same spirit that made 186 men cross that line in the sand in San Antonio damned near 165 years ago is still in you today. Why else would my friend send me William Barrett Travis' plea for help in an email just a week ago, or why would Charles Stenciled ask me to reprint a Texas Independence column from a year ago?

What would make my friend Elizabeth say, "I don't know if I can marry a man who doesn't love Texas like I do?" Why in the hell are 1,000 people coming to my house this weekend to celebrate a holiday for what used to be a nation that is now a state? Because the spirit that made that nation is the spirit that burned in every person who founded this great place we call Texas, and they passed it on through blood or sweat to every one of us.

You see, that spirit that made Texas what it is, is alive in all of us, even if we can't stand next to a cannon to prove it, and it's our responsibility to keep that fire burning. Every person who ever put a "Native Texan" or an "I wasn't born in Texas but I got here as fast as I could" sticker on his car understands. Anyone who ever hung a map of Texas on their wall or flew a Lone Star flag on their porch knows what I mean.

The fact that you would take 15 minutes out of your day to read this, because that's what Texas means to you, that's what makes Texas what it is. The fact that when you see the guy in front of you litter you honk and think, "Sonofabitch. Littering on MY highway."

When was the last time you went to a person's house in New York and you saw a big map of New York on their wall? That was never. When did you ever drive through Oklahoma and see their flag waving on four businesses in a row? Can you even tell me what the flag in Louisiana looks like? I damned sure can't.

But I bet my ass you can't drive 20 minutes from your house and not see a business that has a big Texas flag as part of its logo. If you haven't done business with someone called All Tex something or Lone Star somebody or other, or Texas such and such, you hadn't lived here for too long.

When you ask a man from New York what he is, he'll say a stockbroker, or an accountant, or an ad exec. When you ask a woman from California what she is, she'll tell you her last name or her major. Hell, either of 'em might say "I'm a republican," or they might be a democrat.

When you ask a Texan what they are, before they say, "I'm a Methodist," or "I'm a lawyer," or "I'm a Smith," they tell you they're a Texan. I got nothin' against all those other places, and Lord knows they've probably got some fine folks, but in your gut you know it just like I do, Texas is just a little different.

So tomorrow when you drive down the road and you see a person broken down on the side of the road, stop and help. When you are in a bar in California, buy a Californian a drink and tell him it's for Texas Independence Day. Remind the person in the cube next to you that he wouldn't be here enjoying this if it weren't for Sam Houston, and if he or she doesn't know the story, tell them.

When William Barrett Travis wrote in 1836 that he would never surrender and he would have Victory or Death, what he was really saying was that he and his men were forged of a hotter fire. They weren't your average every day men.

Well, that is what it means to be a Texan. It meant it then, and that's why it means it today. It means just what all those people north of the Red River accuse us of thinking it means. It means there's no mountain that we can't climb. It means that we can swim the Gulf in the winter. It means that Earl Campbell ran harder and Houston is bigger and Dallas is richer and Alpine is hotter and Stevie Ray was smoother and God vacations in Texas.

It means that come Hell or high water, when the chips are down and the Good Lord is watching, we're Texans by damned, and just like in 1836, that counts for something. So for today at least, when your chance comes around, go out and prove it. It's true because we believe it's true. If you are sitting wondering what the Hell I'm talking about, this ain't for you.

But if the first thing you are going to do when the Good Lord calls your number is find the men who sat in that tiny mission in San Antonio and shake their hands, then you're the reason I wrote this tonight, and this is for you. So until next time you hear from me, God Bless and Happy Texas Independence Day.

May you be poor in misfortune, rich in blessings, slow to make enemies and quick to make friends. But, rich or poor, quick or slow, may you know nothing but happiness from this day forward.

Happy birthday, my beloved state. May you and your residents, both native and those who got here as soon as they could, grow and prosper.