A Washington State representative has some news for all you bicyclists who are feeling so smug about saving the environment.

Riding nonmotorized two-wheelers causes cyclists to have "an increased heart rate and respiration," according to Orcutt. And because of that exertion, "You would be giving off more CO2 if you are riding a bike than driving in a car."

Orcutt's assessment first came via an email exchange with a constituent who questioned the wisdom of the proposed new bike tax, which is part of the state's transportation bill.

Orcutt then elaborated on his stance in a conversation with the Seattle Bike Blog. He told blogger Tom Fucoloro that while Orcutt hasn't "done any analysis" of the difference in CO2 from a person on a bike compared to the engine of a car, "You can't just say that there's no pollution as a result of riding a bicycle." 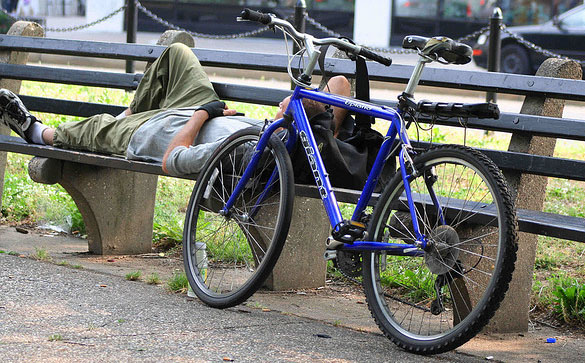 Orcutt's right about the increased respiration. I hit the stationary bike at my fitness club this morning and I was panting before I fell off the machine the session was over.

But I think he's blowing all the heavy breathing out of proportion.