Home Table of Contents Tax Tips Credits Deductions Refunds State Taxes Politics/Laws Tax Terms Archives
4 ways to be a better tax client
When will you get your tax refund? Whenever

Now this is a problem that a lot of would like to have.

Adi Ignatius, Editor in Chief of Harvard Business Review, announced to readers last week that The IRS Just Sent Me $160,000. Can I Keep It? 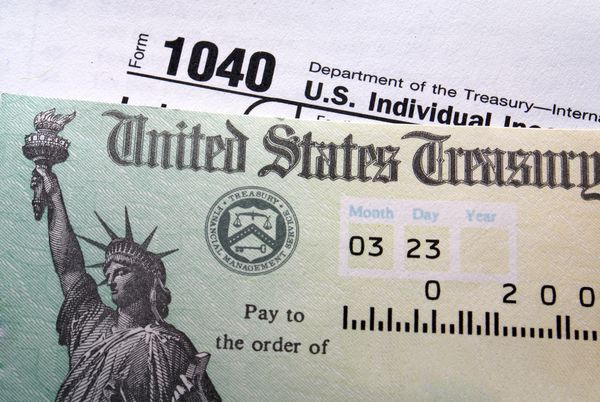 The short answer is probably not.

But the amount is this week's By the Numbers figure.

As Ignatius notes in his article, rough calculations indicate that to have received a refund of that magnitude, he'd have to have earned more than $3 million.

"I'm an editor, with an editor's salary," wrote Ignatius. "So when I say I'm 'almost certain' that I'm not entitled to this refund, by that I mean I'm 100 percent certain."

More money for me, too: I understand Ignatius combination of excitement over getting more money from the Internal Revenue Service than expected and terror at what mistake might have been made in filling out the return in question.

Back in 2004 I filled out our 1040 and sent it and a check for a couple hundred dollars to Uncle Sam.

Two months, like Ignatius I got a notice from the IRS informing me that it had recalculated my filing and corrected some mistakes.

There also was a big check included in the official government envelope.

In my case, the IRS was correct.

In those pre-tax software days I used the wrong tax computation table, entering the tax amount for a single taxpayer instead of what was due from a jointly filing married couple.

Now I suspect Ignatius is probably correct that in his case the IRS messed up. It happens.

And I suspect that the agency will soon want the check, or at least part of it, back.

What Ignatius can do in the meantime is stick the money in an account where it can earn a little interest until he sends it back to Uncle Sam. Given the low rates on totally liquid accounts, it won't be that much, but it's something.

And if, as in my case, the IRS is indeed correct, Ignatius can roll that money into a better paying savings instrument.

Emerald Card errors: It's not just the IRS that has refund issues. Last week, some H&R Block customers who got anticipated tax refund cash via the company's Emerald Card found their amounts were messed up.

They also got more money on the cards,

These cards typically are used by people who do not have a bank account and want to receive a refund faster than they would by waiting to file and getting a snail mail regular check.

Card holders quickly went online, reporting their tax cards initially showed the amount they expected, then more and then, in some cases, were suspended.

In these cases, it wasn't an over-payment by Uncle Sam. It was a glitch in the card issuer's system.

"There was a technical problem experienced by the H&R Block Bank card processor," company spokesman Gene King told me by email. "It impacted an isolated number of H&R Block Emerald Card clients but has been resolved. While it was being addressed, these clients were prevented from accessing funds on the Emerald Card for a limited time."

The bottom line is that you need to keep an eye on your expected refund.

There are millions of folks filing and most of them are getting money back from the U.S. Treasury. It's not unusual for mistakes, be they by the government or private firms involved in the process, to pop up.

Refund options: If you do have a bank account, the IRS encourages you to have your refund directly deposited. Refunds delivered this way get to taxpayers more quickly than those sent via the U.S. Postal Service.

In fact, says the IRS, if you have multiple accounts, consider spreading your refund among them. Those options, as well as getting your refund as U.S. savings bonds, is today's Daily Tax Tip:

You can have a portion of the refund sent to your checking account to help you pay bills, another amount directed to savings, a third chunk of cash sent straight into your individual retirement account and use up to $5,000 in tax refund money to purchase savings bonds.

If you want bonds, you'll can get the Series I instruments sent to you via mail in paper form. Or if you have a Treasury Direct online account, or open one before you file, you can have the bonds sent electronically to that account.

Whatever distribution you select, you'll need to file Form 8888, Allocation of Refund. Also have your account and routing numbers handy.