IRS vs. tax pros: Uncle Sam wins a bit, loses some in Round 2 of legal battle with preparers over registration and testing

So how's tax filing season going for you?

Despite Internal Revenue Service arguments that this tax filing season would be more messed up that it already is thanks to late Congressional action, things seem to be going along as well as can be expected.

That probably factored into a federal judge's rejection of the IRS request that he lift an injunction against its oversight efforts aimed at unlicensed paid tax preparers.

Plus, no one I talked to really expected U.S. District Judge James E. Boasberg of Washington, D.C.,to reverse himself.

Just two weeks ago, Boasberg sided with three tax preparers who went to court to stop the IRS from testing (for a fee) tax pros who aren't otherwise required to meet professional standards.

Basically, the IRS wants to ensure competency of tax preparers who aren't attorneys, CPAs or Enrolled Agents. To do so, it created the Registered Tax Return Preparer, or RTRP, program and instituted a test for such preparers. The trio of independent tax preparers contend the IRS doesn't have the authority to do this.

In agreeing with the preparers on Jan. 18, Boasberg issued an injunction against the IRS' RTRP actions. So the IRS halted the program, including issuance of preparer tax identification numbers, or PTINs.

The IRS went back to Boasberg and asked him to lift his injunction at least until the agency's appeal is heard. The IRS argued that the filing season would be chaos if it couldn't use systems it had in place to administer the process.

But filing season 2013 opened on Jan. 30 with the court order in effect and the world, tax and otherwise, didn't stop spinning.

So it's no surprise that in his ruling on the IRS request yesterday, Feb. 1, Boasberg left his injunction in place.

He did, however, clarify things a bit:

Today the following message shows up when you try to download Form W-12, used to obtain or renew a PTIN: 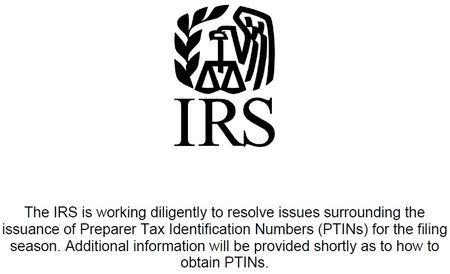 So, as the W-12 announcement notes, the IRS is in the process of reopening its PTIN system.

I'm not sure if this website info is enough for the Ways and Means Oversight Subcommittee chair who also wants answers from the IRS about its RTRP system, but it's all we've got right now.

More from the judge: Basically, in this latest ruling Boasberg pointed out that his original injunction doesn't affect the requirement for paid tax return preparers to have and use a PTIN.

As noted in my Bankrate Taxes post on this case, the PTIN system was essentially OK'ed when another federal judge ruled last June that the IRS could collect a fee for PTINs.

But the IRS apparently shut it down in an abundance of caution. Or maybe in an abundance of pique at the ruling. They were taking their PTIN and going home and to heck with everyone else who's involved. Not that I'm saying the IRS would be that petty. Just sayin'.

The National Association of Tax Professionals (NATP) also reports that following Boasberg's latest order, it had received the following information from the IRS:

The recent Loving v. IRS court ruling does not affect the requirement for paid tax return preparers to have and use a PTIN. As such, the PTIN system is now reopened for processing renewals and new applications. Please note the alert that is located on the login screen:

ALERT: The PTIN system is being updated to reflect current requirements. Until those updates can be completed, a screen titled Continuing Education (CE) Completion may appear during PTIN renewal. Please check either one of the boxes on that screen. This information is NOT being collected, but you must check a box to advance to the next screen. We apologize for any inconvenience.

The PTIN helpline is tentatively planned to open on Monday.

As for the paper PTIN renewals and application, the IRS will begin expeditiously processing them on Monday.

And Boasberg actually seemed to agree with the general IRS position that tax pro education could be a good thing.

In his order, Boasberg wrote that the IRS "may choose to retain the testing centers and some staff, as it is possible that some preparers may wish to take the exam or continuing education even if not required to. Such voluntarily obtained credentials might distinguish them from other preparers."

But will such credentials eventually be required? That will be decided by other judges. And it likely will be be well after this filing season before we get their final rulings.