It kind of was overshadowed by yesterday's Super Bowl, but Sunday, Feb. 3, was a big day in the tax world.

It marked the 100th birthday of the modern tax code.

Actually, it was the day 100 years ago that the 16th Amendment, the one that authorized the federal income tax as we know it, was approved by Delaware.

The anniversary also gets By the Numbers honors this week.

That vote on Feb. 3, 1913, by Ocean State lawmakers gave the amendment the requisite 36 state approvals, making it constitutionally legal.

It's no secret that many folks, including some in the U.S. Congress have called for repeal of the 16th Amendment.

They oppose all taxes, but they hate the federal income tax most of all. So much in fact, that many members, all on the Republican side of the aisle, have signed the infamous no-tax pledge.

I agree that over the last 100 years the Internal Revenue Code has gotten a bit -- OK, a lot -- out of control.

But I also still agree with Supreme Court Justice Oliver Wendell Holmes, Jr.: "I like to pay taxes. With them I buy civilization."

Some of my favorite tax-financed perks of a civilized society are smarter kids, better roads, police and fire protection and on the national level, our military and our major social programs, Medicare and Social Security.

Many states, including my own Texas, have been whacking at things like education. Lone Star lawmakers got whacked back today when a state judge ruled against recent budget cuts.

But voters in California, the state that popularized anti-tax votes, last fall approved state tax increases that will, in part, pay for education programs.

Taxes then and now: On the federal level, defense and domestic programs will face, once again, the possibility of steep cuts, known as sequestration, in a few weeks.

Will that happen on Capitol Hill? Will federal programs be sliced or will a real deal be struck?

And what part, if any, will wider tax reform play in the process?

At this point, there are no clear answers.

But we can hope that all these questions will lead, eventually, to federal tax reform.

There's no way we'll get back to the original 1913 Form 1040 income tax return. That's the single page pictured below that U.S. taxpayers filed 100 years ago. 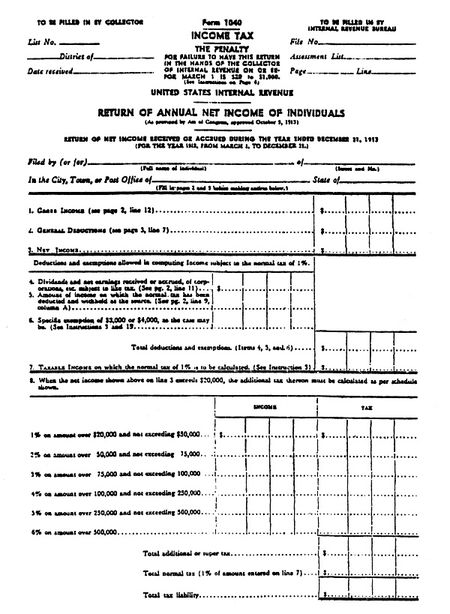 Click form image for a larger view (opens as PDF).

But maybe we can soon trim back some of the tax laws with which we struggle this time of year.

"Today, more than 148 million individuals file federal income taxes. And when they do, they struggle to make sense of a tax code that is too complex, too confusing and riddled with special-interest loopholes.  Nearly 9 out of 10 Americans either pay someone to prepare their taxes or buy software to do their own taxes, reinforcing the notion that our tax code is broken and needs to be reformed.  Comprehensive tax reform can make the code simpler, fairer and easier to comply with, all of which can lead to families having more time, energy and money for what matters most – their families."

Here's hoping these three legislators and their colleagues can come to some tax simplification agreements before the federal tax code celebrates another birthday.