Has the return of the full payroll tax cut your spending?

It's been almost two months since employers began withholding Social Security taxes from workers at the rate of 6.2 percent of wages.

Workers in 2011 and 2012 had a little more money to spend thanks to the payroll tax holiday. But this two-percentage-point cut in the Social Security tax withheld from workers' paychecks expired on Dec. 31, 2012.

That, says a recent survey, is why we're seeing less consumer spending in early 2013.

Tax Policy Center analysts estimate that the full 2013 payroll tax will mean an average loss of about $740 to every worker.

And a just-released poll commissioned by the National Retail Federation (NRF) found that almost three-quarters of surveyed consumers said that their spending and budgeting plans have been negatively affected by the return of the full 6.2 percent FICA payroll tax. 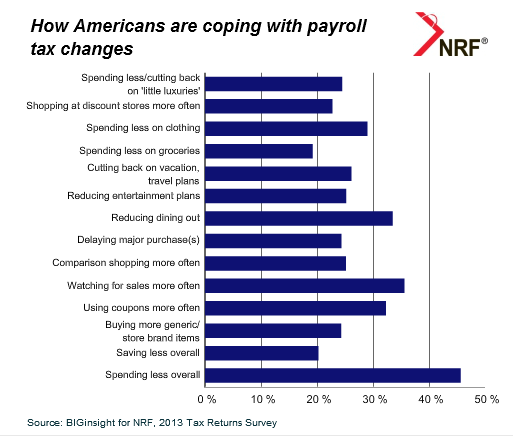 The reduction of the payroll tax rate to 4.2 percent always was planned as a temporary stimulus tool. Still, many thought that the tax cut would be continued for at least another year as part of the fiscal cliff bill. But when Congress finally OK'ed the American Taxpayer Relief Act of 2012 on Jan. 1, the payroll tax cut was not included.

Early reports seemed to show that the return of the full payroll tax rate was negligible, as consumers kept up their shopping pace immediately after it expired. But those early reports, particularly numbers from the International Council of Shopping Centers (ICSC), were likely based on activity before people had received 2013 paychecks with more FICA tax taken out of them.

Michael Niemira, ICSC's chief economist, cautioned in an interview last month with the Washington Post that one month's numbers don't mean that shoppers are back to full health.

"The payroll tax is one of these things that accumulates," he said.

Retailers expecting fewer shoppers: That accumulation factor seems to be showing up in the NRF survey.

Of those greatly impacted by the loss of added income, nearly half (49.2 percent) plan to delay major purchases, such as a car, TV or furniture. Other notable findings:

And income levels also come into play as to how the return of the full payroll tax affects individuals.

Half of those surveyed who make less than $50,000 a year say they will spend less overall.

Earlier this year, Family Dollar stores, one of the biggest dollar store chains in the country, announced that its end-of-2012 earnings fell short of analysts' projections. There was speculation that consumers were already cutting back in preparation for the payroll tax's return.

Now Wal-Mart, the world's biggest retailer, says its corporate earnings were hindered in part by the payroll tax increase.

Will the cumulative effect of the withholding tax continue through 2013? If so will Congress look at some other form of stimulus to get shoppers into stores? Maybe. But since there's no impending election, don't expect to see them jumping on this tax-break train as quickly.

How do you compare with the NRF survey participants? Has the return of the 6.2 percent withholding level affected your spending patterns? By a lot or just a little?

Since my wife now works as a contract medical professional and our health insurance is through her retirement, the reduction of the maximum allowable Health Care Spending Account from $5000/person to $2500/person (and now just me eligible to use one) hurt us worse than the expiration of the 2% payroll tax holiday.

We already have racked up almost $2500 (dental & hearing aid) in health care expenses and we're still in February.
However, we purchased long term care insurance in November (paying 25% of annual prem as application) and will pay 75% of annual premium between 1/2013-6/2013 (when her contract expires) so that will take the sting out of the reduction in the HCSA pre-tax account.

Having said that, my co-workers were clueless when they got 2013 check no. 1 and their take-home pay had been reduced.