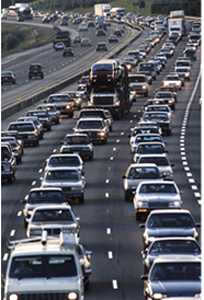 Has the decision by Yahoo CEO Marissa Mayer to eliminate telecommuting prompted your boss to issue a similar "get your butt into the office" edict?

Sorry. I share your pain at having to now hit the road instead of commuting down the hall to your home office.

But maybe the hassle of getting to work can be eased by some commuting tax breaks.

Commuter benefits: Many workplaces offer their employees tax-free benefits to cover some of the costs of getting to and from the office. They're known by many names: Qualified Transportation Benefit (QTB), Commuter Savings Account (CSA) Commuter Expense Reimbursement Account (CERA).

Regardless of what you or your employer call them, they essentially work the same.

You contribute to a workplace account and then use that money to pay commuting costs, either public transportation (bus, rail, subway, trolley and even ferry) fares or parking fees for the car you drive to work.

Here's the best (OK, best for tax geeks) part. Your contributions go into one of these accounts before your payroll taxes are computed. So in addition to helping you cover some commuting costs, the pre-tax contributions cut your tax bill somewhat.

History of workplace travel benefits: For years, the commuting benefit edge went to drivers. The amount that a worker could save to cover car parking costs was greater than what bus, train, et al. commuters could stash pre-tax.

But as part of the American Recovery and Reinvestment Act of 2009, better known as the Obama stimulus plan, the mass transit account limit was equalized.

That year, public transit and automotive commuters were allowed to put the same amount, $230 a month, into their workplace accounts. The bill also provided that the amount would be adjusted annually for inflation.

There was just one downside. The parity provision was temporary.

Hold on, commuters. There is good news.

The American Taxpayer Relief Act of 2012, aka the fiscal cliff bill, reinstated the commuting plans' parity. The law makes the tax benefit available retroactively to the 2012 tax year and through 2013.

The table below from the Tax Foundation shows the history of the commuting benefits. 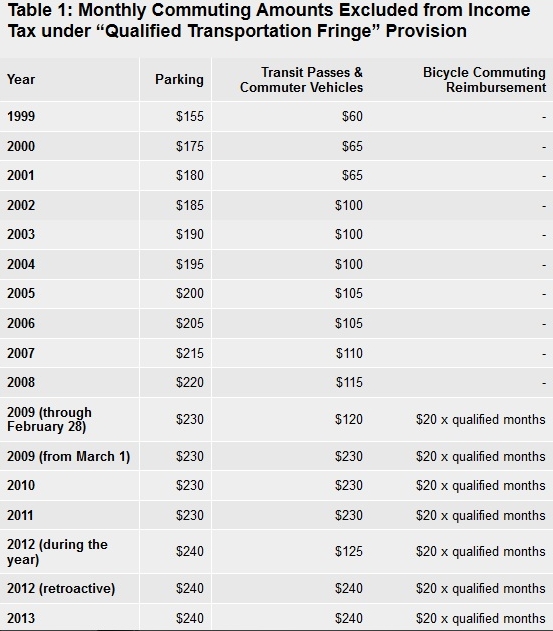 Following enactment of ATRA, the Internal Revenue Service issued guidance on how workers who received reduced mass transit benefits in 2012 can recoup their lost amounts.

Bicycles, too: Two-wheel enthusiasts have probably noticed the table's third column with an amount available for bicycling commuters.

And you've also noticed that it is far from being on a level roadway with the other commuting methods.

The best advice I can give you here is to let your lawmakers know your concern about the bicycling commuter injustice.

But I also must remind you that as Congress struggles with general budget and specific sequester (Yikes! Big spending cuts take effect tomorrow!) and government funding (Uncle Sam's agencies run out of money at the end of March) issues to deal with, increasing tax breaks is not exactly high on the Capitol Hill to-do list.

The extension and mass transit-parking parity approved under ATRA is only through the 2013 tax year.

Plan your route to work accordingly.

Strictly speaking commuting is not deductible by the taxpayer/driver. But they can get tax-free fringe benefits at work. No, only reimbursement for parking, not fuel.

Interesting. I always thought commuting was not tax deductible. It seems like these accounts are similar to flexible spending accounts. If you drive, is gas covered for commuting? Or just parking? Either way, I doubt my employer offers any of these accounts.