President Obama is working on his annual budget, but we know one thing that he won't be asking Congress to approve: construction of a Death Star. 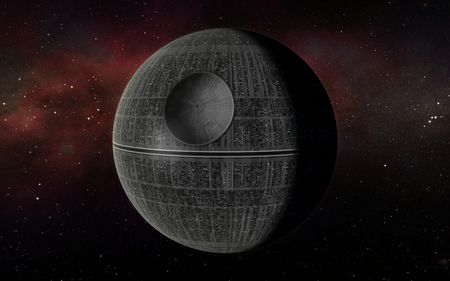 The Lehigh University students who arrived at that spectacular amount say it is roughly 13,000 times the world's gross domestic product and is for just the steel needed to complete the project.

$850 quadrillion (yes, I looked up the name for 15 zeros) also is this week's By the Numbers figure.

Petition position: How do we know that Obama, who once demonstrated his light saber prowess during a youth sporting event on the South Lawn of the White House, has nixed the Death Star idea?

Because Paul Shawcross, chief of the Science and Space Branch at the White House Office of Management and Budget, said so.

The White House gave Shawcross the task of responding to a We the People petition asking that America begin building a version of the Death Star by 2016. The petition was signed by more than 34,000 supporters.

In his "This is not the petition response you're looking for" reply, Shawcross listed three reasons for the Administration's rejection of the request.

Second, the Obama Administration does not support blowing up planets.

Finally, asks Shawcross, "Why would we spend countless taxpayer dollars on a Death Star with a fundamental flaw that can be exploited by a one-man starship?"

I swear, I think Eric Foreman, "Star Wars" fan extraordinaire from "That '70s Show," grew up, changed his name to Paul Shawcross and went to work at the Obama White House.

And Foreman Shawcross gets much, much credit for writing the best official government response to anything, anywhere and will likely hold that title for years if not forever.

Even better, starting with the title, the petition response ensured that memorable lines from the sci-fi movie franchise are now a permanent part of the national record.

We "Star Wars" fans and taxpayers thank you.