How long does it take you to file your tax return?

The Form 1040 instructions book estimates that a taxpayer needs on average around 18 hours to complete a tax return.

An analysis of IRS data by the Office of the Taxpayer Advocate extrapolates those figures even further. It found that it takes all U.S. taxpayers more than 6.1 billion hours to complete their annual tax filing tasks.

Tax complexity is again atop Olson's list of the most serious taxpayer problems in her 2012 Annual Report to Congress. In her executive summary, Olson notes that this is why nearly 60 percent of taxpayers hire paid preparers and another 30 percent rely on commercial software to prepare their returns. 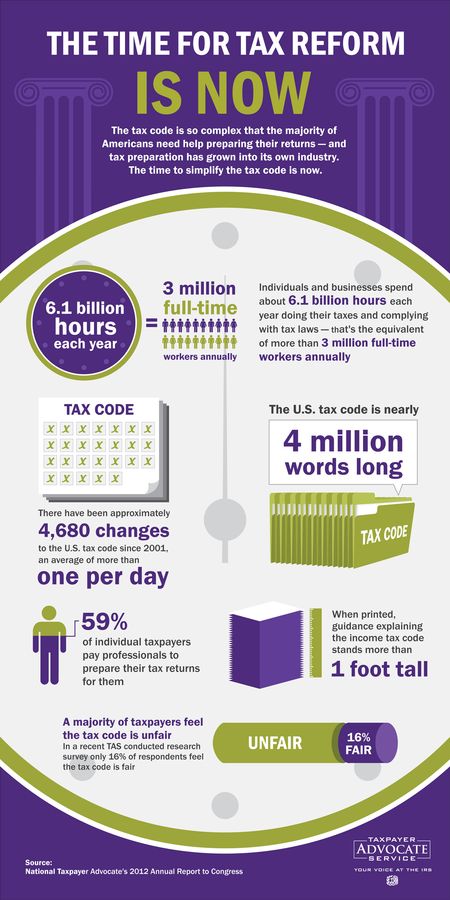 Click image for a larger view of this and other Taxpayer Advocate infographics.

"To inspire confidence and trust, the tax laws should be comprehensible and the computations of tax should be transparent and relatively simple," Olson writes.

So she once again is urging Congress to "vastly simplify the tax code to make tax compliance easier."

We might eventually get tax reform. I was even hopeful that it would be this year.

But then along came the last-minute fiscal cliff tax bill, the American Taxpayer Relief Act (ATRA).

Yes, ATRA did help with tax planning and filing by making many tax provisions permanent. FYI, in tax-speak that just means that the provisions no long have expiration dates. Congress can still undo or redo things as it sees fit.

But it also added to Internal Revenue Code complexity by once again adding rather than subtracting tax laws. Just ask folks this time next year how simple the personal exemption and itemized deductions phaseouts are.

Now Congress must focus on the upcoming mini-cliffs: the spending cuts, aka sequestration, that was postponed by ATRA; the debt ceiling (remember the fun we had with this in the summer of 2011?); and the continuing resolution that must be renewed (or a final budget deal reached) by the end of March to keep the federal government running.

That's an election year and very few politicians will be willing to talk about getting rid of tax breaks -- and that's a key component of tax simplification -- when they will be facing voters.