You might be according to the new tax laws that were enacted as part of the bill to keep us from falling off the fiscal cliff. 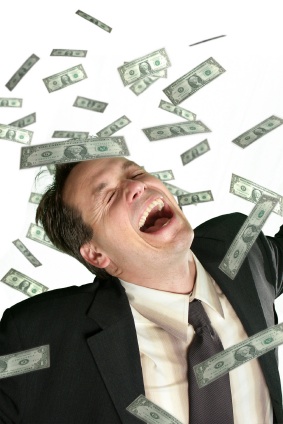 Democrats are spinning enactment of H.R. 8, the American Taxpayer Relief Act (ATRA) of 2012, as a victory because wealthier individuals now face higher taxes for the first time in more than a decade.

Republicans are touting the permanence of the lower tax rates that originated during the George W. Bush administration for the rest of us less wealthy Americans.

The hubby and I definitely fall into the not-rich category.

When we were kids, a $1 million meant rich. Inflation and scary people who've gotten scary rich courtesy reality shows and tabloid celebrity TV shows (yes, I am talking to you, Kardashian clan) have moved the wealthy bar a bit higher.

But now with ATRA's new taxes, the definition of rich, at least from a tax standpoint, is broader and more complicated for a lot of folks.

Rich for income tax purposes: President Obama wanted the rich cutoff to be $200,000 a year for single taxpayers and $250,000 for couples filing jointly.

Members of Congress with constituents in major metropolitan areas, primarily on both coasts but also in big cities across the country, felt that was way too low.

Now a single taxpayer earning $400,000 will pay a maximum income tax rate of 39.6 percent. Couples making a combined $450,000 on their joint returns will face the highest tax rate.

If you itemize deductions in 2013 you are rich if as a single filer you make $250,000 a year. As such, you'll have some of your Schedule A claims reduced by 3 percent of the amount you make over that earning threshold.

This phaseout of deductions is known as the Pease rule. It was named after former Rep. Donald Pease (D-Ohio) who pushed for the original law in 1990. Under the Bush tax cuts, the Pease phaseout was gradually reduced and it was eliminated from 2010 to 2012.

Why does it take less to be considered rich when you itemize than it does when you figure your income tax rate? Because redefining rich in this case will get the U.S. Treasury more tax dollars.

Those same income limits also will cause the tax-defined wealthy to lose some of the value of the personal exemptions they claim.

This is known as the personal exemption phaseout, referred to as PEP by tax geeks (guilty!). It, too, was briefly stricken from the tax code, but is now a permanent (another definition Congress has trouble with) part of our tax system.

The personal exemption amount that each taxpayer is allowed for him- or herself, spouse and dependents is estimated to be $3,900 in 2013.

And on tax returns for that year (due April 2014), rich taxpayers will lose 2 percent of their total exemption amount for every $2,500 that their income exceeds their income cutoff threshold.

Don't worry; your tax software or tax pro will have the calculators and worksheets to help you figure out just how much your new-found tax wealth will cost you.

These two new taxes weren't part of the fiscal cliff tax deal. They were created back in 2010 as part of health reform but their collection was delayed until now, the year after the general election. How politically convenient.

Individuals at those same income levels also will see more come out of their paychecks thanks to another health care tax. An additional 0.9 percent will go toward Medicare via payroll withholding once they earn more than their filing status thresholds.

More to come: That seems like plenty of taxes on the rich, right? Wrong.

Obama announced even before the fiscal cliff tax laws were approved by the House that he "will ask for more tax increases on the rich later."

Now as many readers are quick to point out, I'm not adverse to higher taxes on wealthier individuals. Let the emails begin!

But I shudder to think of how Capitol Hill might further rewrite Merriam-Webster when it comes to defining wealth.

I also hate how Congress continually moves the playing pieces on the tax board, both for or against various groups.

I know it's because lawmakers are furiously doing the math to see which taxes at what levels will bring in the most revenue and still be politically palatable enough for Representatives and Senators to vote yes.

Such tax sleight of hand is confusing, infuriating and unfair.

And as long as it keeps up, people will continue to be angry about the overly complicated tax code and the lawmakers who keep making it more so.

Your means of explaining the whole thing in thus post is in fact fastidious, all can effortlessly be aware of it, Thanks a lot.

Yayks, I might under the Rich category but goodness, I am struggling to keep all the budget balance. I am actually having a hard time on my savings, oh please, can anybody change the mechanics of this game? LOL

What is really needed is a sane spending policy, not additional taxes. Our politicians have successfully made this about class warfare to distract all of us from the fact that spending and the national debt are out of control.

When you consider the cost of living in major cities, a $250,000 threshold is way too low, as is the $450,000 threshold. In NYC, a married couple earning above $450,000 will have a combined incremental tax rate in excess of 53%, and that is before you consider the effect of the phased out itemized deductions and exemptions. We talk of tax "fairness". How can anyone consider it fair for the varying levels of government to tax a dollar of income by more than half? This is unconscionable. And this is before you consider the varying levels of sales taxes, excise taxes, property taxes and all of the "use fees" such as tolls and traffic summons surcharges that are really taxes in disguise. And the gentleman in the White House wants even more? Really? How much is enough? All of it? More than all of it? Are we to all become slaves to the government?

The various governments entities are like a giant monster that continues to consume and grow, eating everything in its path. Once it has consumed all there is to consume, then what? Once all of the rich are poor, and the poor are poor, where then will even more money come from?

If you confiscated 100% of the wealth of the richest people in the world, you would reduce the national debt (at all government levels) by about one third. That is their entire WEALTH, not their annual income. Bill Gates-penniless. Warren Buffet-destitute. Then, what will you do with an unbalanced budget and a continually rising national debt? Who will pay up then?

We all better wake up in this country. It is time to challenge how our law makers overspend our money and stop fighting over who funds that overspending.