Well, we have yet another turn in the winding road that is the 2013 tax filing season.

Friday (Jan. 18) afternoon, a federal judge barred the Internal Revenue Service from imposing a series of new regulations, including a competency exam, on hundreds of thousands of tax preparers. 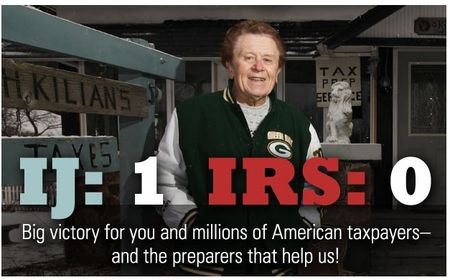 Elmer Kilian of Eagle, Wisc., one of three tax preparers who filed suit against IRS tax preparer licensing regulations, is featured on the Institute for Justice website following the federal court ruling against the plan.

The Registered Tax Return Preparer (RTRP) program, a pet project of former IRS Commissioner Douglas Shulman, was the agency's effort to stem what it sees as increasingly ill-prepared tax returns.

By registering all tax preparers and making those who aren't already credentialed -- Enrolled Agents (EAs), attorneys and CPAs are already regulated by the IRS under Circular 230 requirements -- pass a tax competency exam, the IRS believes it would improve taxpayer service.

Three tax preparers, however, said the IRS was over reaching. With the help Arlington, Va.-based Institute for Justice, a libertarian legal group, they filed suit against the IRS last year charging that the IRS lacked the statutory authority to impose the regulations.

In addition, the trio's court filing argued that the IRS regulations were onerous, would put tens of thousands of mom-and-pop tax preparers out of business and would created a competitive disadvantage versus the groups that did not have to participate in the IRS testing system.

In his opinion, Boasberg issued an injunction that bars implementation of the IRS regulations, which the agency has been phasing in since 2011. The competency exam requirement was to have taken effect in 2014.

The IRS has yet to comment on the ruling, but it is expected the agency will appeal the ruling.

Dan Alban, an attorney with the Institute for Justice, did have some words on the ruling.

Alban called the IRS plan "an unlawful power grab by one of the most powerful federal agencies and thankfully the court stopped the IRS dead in its tracks."

The timing of the judge's decision also was good, added Alban, because the IRS' continuing education requirements just went into effect on Jan. 1. Now tax preparers who could have been put out of business will be able to work during the coming tax season, he said.

"It is also good for the public at large because the cost of preparing a tax return was about to go up" because of the increased regulations, Alban said.

So tax pros who've already embarked on the RTRP path, what do you think? Was the judge correct? What do you think this will mean to the program? Do you think Acting IRS Commissioner Steven T. Miller will fight as strenuously for the program as Shulman?

What, the IRS lacks the statutory authorities to impose regulations? How can that happen? Anyway, IRS should not be over reacting, they should side sometimes to tax payers and understand every situation without breaking the rules.

the kind of questions and the multiple choice responses created too many possibilities for incorrect answers resulting in high failure rates for tax professionals with many years of tax knowledge and experience. those who work for reputable tax preparation corporations are carfully screened by the employer already and any incompetence is handled by such companies. the style of testing does not evaluate tax competency and creates an atmosphere of undue pressure for test takers.