I admit it. I watch TV commercials even when I'm viewing a taped program. Some ads are better than the so-called entertainment programs. And sometimes I need the break to take care of other things, like getting a snack.

H&R Block has been paying attention, too, and thinks the television spots of one its competitors was a slap at its employees.

The Intuit ads' premise is that some tax preparers are part-timers. In one, a woman recognizes a clothing store employee who earlier had done the shopper's taxes. The other features a tax preparer turned plumber.

The ads then tell TV viewers that TurboTax users seeking personal help with their computer-based filings get it from from CPAs, Enrolled Agents and tax attorneys that Intuit hires to provide tax advice to customers.

Neither ad mentions any other tax preparation service by name, but three H&R Block divisions took umbrage. They filed suit in federal court in an effort to have the ads pulled.

And one of the firm's founders was featured on a social media campaign, Twitter's #IAmHRBlock posts, to personalize the tax preparation giant's employees. 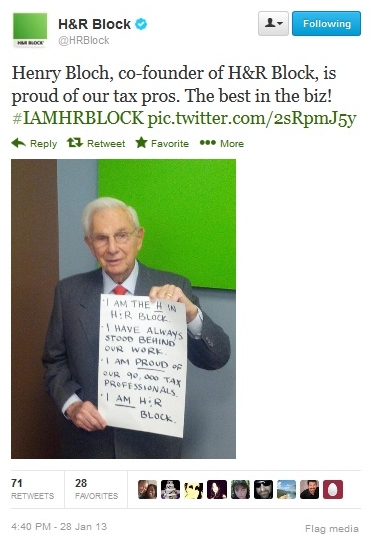 Gaitan, however, ruled that Block failed to show the ads were false or deceptive.

Intuit obviously was happy with the judge's ruling. "We are very pleased with today's decision and will continue to vigorously defend these truthful ads," said Dan Maurer, general manager and senior vice president of Intuit's Consumer Tax Group, in a statement.

So the battle for tax clients continues, both in real life and via ads on small screens across America.

After losing the first round when a District of Columbia federal judge struck down the IRS plan, the IRS indicated it would appeal the decision and asked the judge to lift his injunction, at least temporarily, against registration of tax preparers.

The Institute for Justice, which is representing the tax preparers, has filed its response to the IRS' request.

Now we wait for further word from the D.C. court.

I have not heard about H&R block but this post have informed me about it. Actually my friend is planning to install one but then, if it's like this, well, I think I already know what to tell her.

Two years ago, I saw a banner at the window of an H&R Block storefront, asking "Turbo GPS got you lost?"

It's amazing to see two companies go at each other like this. There's a place for a software package, and a place for a live person, one size doesn't fit all.

I've been writing at the TurboTax Blog, and just authored my first article at H&R Block's Blog, Blocktalk. So it's in my own best interest to be Switzerland, just hoping for all to get along.