518 days after we knew the country was going to face what has become known as the fiscal cliff, federal lawmakers finally backed away from the edge.

Our long, and stupid, financial nightmare is partly over.

At 11:01 p.m., the House voted 257-to-167 to approve the tax bill cobbled together by the Senate (primarily thanks -- or blame if you prefer -- to Minority Leader Mitch McConnell of Kentucky and Vice President Joe Biden) on New Year's Eve and officially -- and overwhelmingly -- approved by the upper chamber in the early morning hours of New Year's Day. 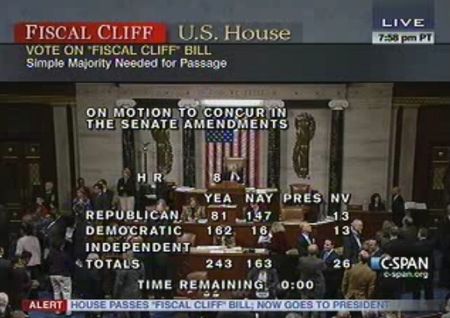 House Kabuki theatre encore: Then it was on to the House. And those drama queens lawmakers didn't disappoint in their usual Kabuki theatrics.

The big and heated debate among Republican Representatives was whether to amend the bill to include spending cuts, which were postponed in the proposal, and send it back to the Senate.

The Senate, however, made it clear that it would have no part in prolonging this fight, especially with Americans heading back to work tomorrow. Now employees, and their payroll departments, know how much income tax will be withheld.

I also suspect that many recalcitrant Republicans were reminded that their individual portfolios would take a hit, even beyond the new 20 percent capital gains and qualified dividend tax rates for higher earners, if the market opened Wednesday to continued fiscal cliff uncertainty.

So House Speaker John Boehner (R-Ohio), who earlier was unable to get his party to support his Plan B (don't you know a lot of them are regretting that now), manned up and brought the Senate measure to the floor for an up-or-down vote requiring a simple majority of the 435 member House.

Crossing party lines: Most Democrats, even the liberals who thought the deal gave away too much, voted for the measure.

Republicans who voted for the bill included House Ways and Means Chairman Dave Camp of Michigan, Budget Committee Chair and former veep candidate Paul Ryan of Wisconsin and Boehner. Speakers usually don't vote unless it's a close vote or they want to show solidarity with members on a difficult issue.

You can check some of the key tax provisions in my earlier post, A quick look at the fiscal cliff's H.R. 8, the American Taxpayer Relief Act of 2012. Or you can read the full legislative language (it's 157 PDF pages) yourself if you are so inclined.

One final question: Are they now the Obama tax cuts?

No pay raise for Congress: Finally, for those of you who were upset that Senators and Representatives would be getting a pay raise in March, you can rest easy.

This bill contains a section that nullifies the pay hike for members of Congress.

Encore, encore ... not! Now we get to countdown to sequestration (aka automatic spending cuts), the deadline for which per H.R. 8 is delayed for two months, and raising the debt ceiling.

I hope that after the House tonight crossed the line of voting on a major bill without any made-up rules (I'm talking to you Hastert Rule, named for the former House Speaker Dennis Hastert who would only put measure to vote that had the support of his majority Republican party) we can get through the spending portion with less drama.

I know, I'm sometimes surprisingly naive for someone who worked in the House and Senate and has followed Capitol Hill for <cough> way more years <cough> than I want to admit.

But a gal can dream, can't she?