When will the IRS be ready for tax filers?

Taxpayers are once again paying the price for Congressional procrastination.

By putting off the fiscal cliff bill until Jan. 1, our Senators and Representatives have probably forced us taxpayers to wait to file our 2012 returns.

That measure, the American Taxpayer Relief Act, included provisions, notably the Alternative Minimum Tax (AMT) and numerous extenders, that affect 2012 tax returns. And although Representatives and Senators were warned repeatedly that their bad work habits would create problems for the Internal Revenue Service and taxpayers, they apparently didn't care.

So now the IRS is working, feverishly we hope, to update tax forms, worksheets, instructions, publications and, most importantly, its computer system so that it can start running your and my 1040s through the system.

The IRS had been aiming for a Jan. 22 official opening of the 2013 tax filing season. That's the day that it had planned to start accepting electronic returns, including those filed at its Free File site.

Will that happen? Or will, as former IRS Commissioner Douglas H. Shulman and Acting Commissioner Steven T. Miller warned, the filing season be delayed for all or at least some of us?

Remember 2011 when late passage of extenders forced some taxpayers to wait until mid-February to file their returns?

How about 2008 and 2007? In those back-to-back tax filing seasons taxpayers were told to delay submission of their returns if they were claiming certain tax breaks, again because the IRS needed time to deal with legislation that Congress passed late in the previous year.

So while we're used to such filing delays, we're understandably not happy about it.

The one bit of good news is that some of the folks involved in helping us file are on top of things.

I got an update today of TurboTax's SnapTax app that allows some taxpayers to file via smartphone. The update notice included this news: 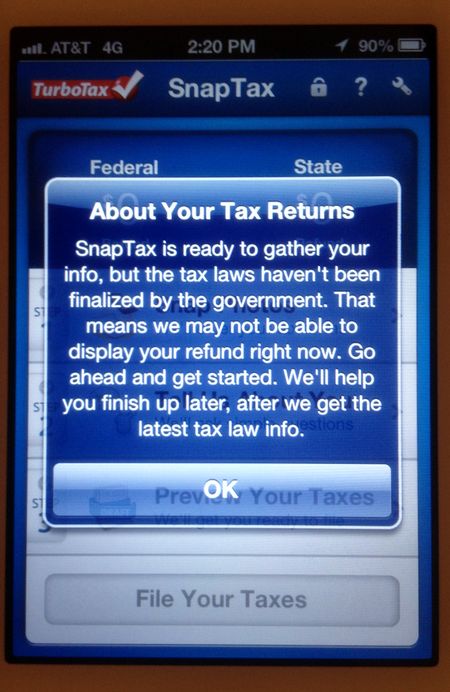 I also spoke with Bob Meighan, a vice president at TurboTax, and Gene King, an H&R Block spokesman, about the possibility of yet another fractured filing season. Both men were incredibly upbeat.

Their general message, which you can read in the post A slight delay in filing season at the Bankrate Taxes Blog, is that when you're ready to file, do so even if the IRS isn't quite ready for you.

Most early filers tend to have relatively simple tax returns so many of the 2012 changes that the IRS is incorporating won't affect them. And even if the IRS is not ready to process the returns, getting your retun in early is still recommended.

The IRS generally handles filings on a first in, first out basis. So getting in at the head of the tax processing line means that the agency should take care of your 1040 earlier and get any refund on its way to you before other returns start working their way through the system.

Will that chain of tax return events begin as planned in a couple of weeks? Maybe. Maybe not.

To be honest, I would not be surprised to see at least a partial delay of returns similar to the 2007, 2008 and 2011 filing seasons mentioned earlier.

But maybe I'll be wrong. Maybe IRS personnel are working overtime as I type so the filing season can start as planned this year.

And if that doesn't happen, don't curse the tax man. Just make a note and remember it the next time you vote for your Representative and Senators.

In the meantime, take the poll below and let me and the ol' blog readers know when you plan to send the IRS your 2012 tax return.

Good web site you've got here.. It's difficult to find high-quality writing like yours nowadays. I truly appreciate people like you! Take care!!