Where would loss of, limit on residential mortgage interest deduction be most felt?

It's starting to look like any fiscal cliff deal will include higher taxes next year on wealthier taxpayers. The question remains, however, just what form will the tax increase take?

Obama still wants to bump up the top two ordinary income tax rates. Republicans are holding out instead for some sort of limit on itemized deductions.

And among the deductions that could be affected is the itemized claim for mortgage interest.

It's unlikely that the deduction will be totally eliminated. The housing industry lobby is still quite strong in Washington, D.C.

But the overall itemized deductions, of which the residential mortgage interest write-off is typically a large part, could be reduced.

Or the deduction for interest paid on a second-home loan could be eliminated.

Either way, because of homeownership trends and housing prices across the country, reduction or elimination of this tax deduction would affect property owners nationwide differently.

The Tax Foundation analyzed 2010 Internal Revenue Service data and created a map showing the percentage of taxpayers claiming the mortgage interest deduction in each state.

The five states with the most residents claiming the mortgage interest deduction are: 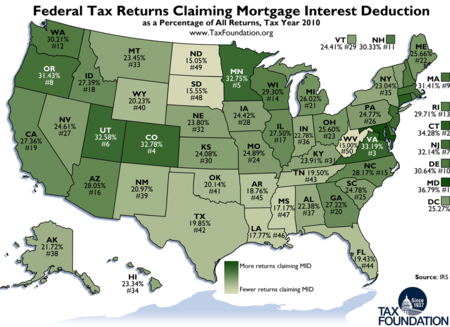 The five states with the fewest mortgage interest deduction claims are:

District of Columbia filers also were part of the mix, although the area was not included in the numerical ranking. The nation's capital, which is surrounded by the many Maryland and Virginia residents who make wide use of the deduction, fell around the middle of the mortgage interest claims percentage.

Obviously areas where houses are not that expensive or not that many residents, relatively speaking, own homes or at least mortgaged residences had fewer claims.

And places where the housing crash was worse, such as California, Florida and Nevada, weren't near the top in mortgage interest deduction claims, since so many homeowners there lost their homes and the associated homeownership tax breaks.

But I was surprised to see my home state of Texas with so few claims. The housing sector here was relatively unscathed.

Apparently many of my fellow Lone Star State residents have either paid off their home loans or they've paid enough of their mortgages that the interest amount along with other possible itemized deductions is not large enough to exceed the standard amount they could claim.

Most taxpayers, in fact, do claim the standard deduction each year.

But for those filers who do itemize on Schedule A, the home mortgage interest is a major component, regardless of where in the United States they live.

How much would losing the mortgage interest deduction or a part of it hurt you at tax filing time?

Since I prepare individual income tax returns only as a volunteer, perhaps my clients are not representative. However, in twenty tax seasons I've never seen a taxpayer itemize without mortgage interest.