Home Table of Contents Tax Tips Credits Deductions Refunds State Taxes Politics/Laws Tax Terms Archives
Many companies paying dividends early; Be sure to plan for taxes on the income
Where would loss of, limit on residential mortgage interest deduction be most felt?

Most of the time, an inheritance is welcomed. Except when it brings an unexpected tax bill.

That's the situation some Pennsylvania residents find themselves in. And it could get worse as Baby Boomers help out their aging parents.

AARP's October Bulletin told of what happened to Carol and Paul Kurland, both in their 80s, and their 56-year-old daughter Amy.

The Levittown, Pa., couple added Amy to their bank accounts to allow her access to funds if they faced a sudden health crisis. That's a common practice in families.

But when Amy died, the Kurlands were hit with a tax bill for several thousand dollars.

The Kurlands had just discovered that under Pennsylvania law, the state considered a third of the money in the accounts to be Amy's property.

Her parents, originators of the accounts, "inherited" it when their daughter died. And they owed a 4.5 percent tax on their unexpected inheritance.

Know the law: Extreme? Yes. But it's Keystone State law. The Pennsylvania Department of Revenue explains in its taxpayer help section:

If my mother's name is listed on my savings account, will it be subject to inheritance tax since it is a joint account? Under the inheritance tax law, the account was jointly owned because you and your mother had equal access to the account. Therefore, in this example the survivor is taxed on one-half of the amount in the account.

Jan. L. Brown, an estate planning and probate attorney in Harrisburg, Pa., suggests that families such as the Kurlands consider instead a power of attorney:

The interactive map below (from Forbes using CCH data) below gives you an overview of these states' laws, as well as those in states that collect estate taxes. 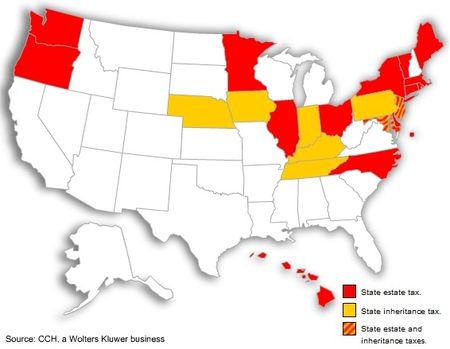 Click on the map to find out more on state inheritance/estate taxes.

If you live in one of them, check with your tax adviser and/or your state tax department to make sure that when one of your loved ones passes away, you don't end up owing some unexpected taxes.

Inheritance vs. estate tax: Many people refer to all taxes collected upon a person's death collectively as death taxes, but there distinct differences in an estate tax and inheritance tax.

An estate tax is a tax imposed on the deceased's estate as a whole. The executor fills out a single estate tax return and pays the tax out of the estate's funds. The heirs will only be held liable for the tax if the executor fails to pay it.