President Obama spent about an hour this afternoon on Twitter answering a few questions about fiscal cliff consequences, proposals, negotiations and Chicago sports teams (you knew someone would ask).

Not surprisingly, there were no stunning new revelations on how Congress, particularly the Republicans, and the White House are going to keep us from doing a financial Thelma and Louise.

As soon as the White House announced the social media question and answer session, directly from the prez with his -bo online signature ...

... the #My2k hashtag, created by the Administration to collect stories of what the estimated average middle-class $2,000 in tax savings that could be lost without Congressional action, was flooded.

Obviously, there was no way that Obama could answer all the questions, which came as legitimate queries, as well as statements of support for the White House position and from the loyal opposition via @SpeakerBoehner, @MajorityLeader, @Heritage and individual conservative Twitterers (Tweeters?).

And as expected/suspected, the White House selected questions that Obama could easily answer -- and yes, he did do the typing himself; the photos below of his hands (artsy!) and then of the president at his laptop got lots of retweets -- in a way to lobby the public for his position that any fiscal cliff deal must include tax hikes on the wealthiest 2 percent of taxpayers. 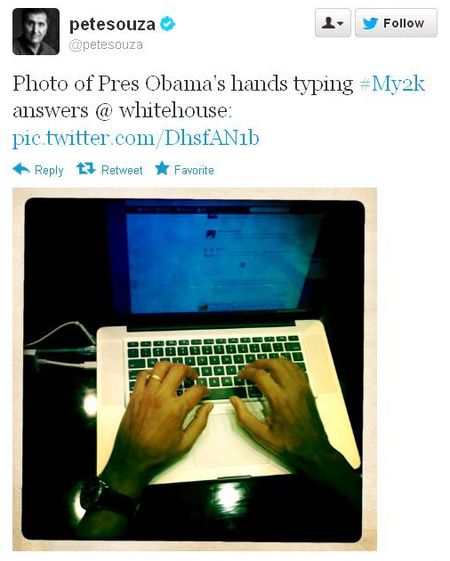 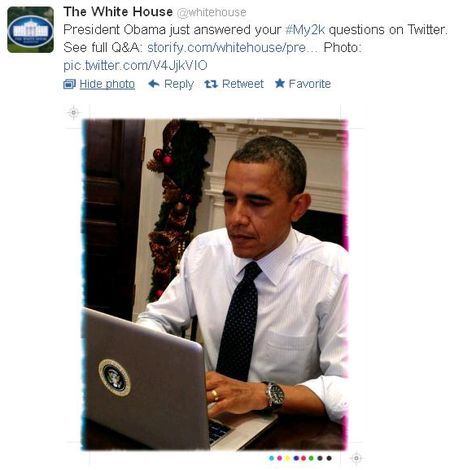 But the prez wasn't averse to using what some might call scare tactics, as evidenced when @soitgoesem asked about tax breaks for homeowners:

As a home owner, I worry deductions for home owners are at risk. Is that the case?

Did Obama's Twitter chat change any minds, among the public or in the House or Senate? Probably not.

But he once again made it clear that he learned from a similar tax showdown earlier this year, when public pressure forced the GOP to relent and extend the employee payroll tax cut through 2012.

You can check out the official Q&A at @whitehouse or see it in chronological order saved via Storify.