Could it be? Could the country be slowly backing away from the fiscal cliff?

Late Friday, House Speaker John Boehner (R-Ohio) proposed a tax-rate increase -- mark it down; it was a first! -- on individuals with income of more than $1 million.

The fact that the leader of the Republicans in the House has made such a move earns his $1 million earnings threshold By the Numbers honors, a day late (it was a crazy weekend!) and, based on my bank account, $999,999 short.

Raising the top tax bracket from the $200,000 for singles, $250,000 for families top tax level that the president wants has been suggested before, even by some leading Democrats.

The concern has been that $200,000 to $250,000 doesn't really qualify some folks (and small business owners who file Schedule C with their personal returns) as rich, especially in cities on America's two coasts.

So bipartisan support of changing the definition of rich for income tax purposes might fly.

Of course, Boehner says that the $1 million level is only if the White House and Democrats will cut spending by an amount greater than the tax increase.

And the revenue lost be upping the top tax bracket $750,000 to $800,000 is significant. The Center for Budget and Policy Priorities, a Washington, D.C., organization that advocates for lower-income Americans, says the change would mean $366 billion less revenue over the next 10 years. 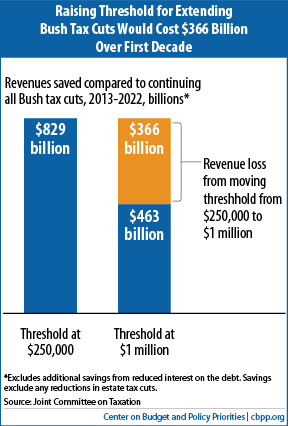 To sweeten the deal, the Speaker has thrown in raising the debt ceiling for another year. That would push a potential fight similar to the one on Capitol Hill in the summer of 2011 back for a year.

That add-on, however, could sour the deal.

Boehner still has to assure his Republican cohorts, particularly the very conservative deficit hawks, that he's not backing off his spending cut demands.

"First Speaker Boehner offered to raise tax rates after promising not to, and now he's offering to raise the debt ceiling. Raising tax rates is anti-growth and raising the debt ceiling is pro-government growth, and this is the Republican position?" said Chris Chocola, president of the economically conservative nonprofit Club for Growth.

The amount of revenue collected in reality is almost always far short of what Congress estimates.

That's because the models Congress uses don't accurately account of the reduced economic activity that is inevitably associated with tax cuts.

The most dramatic example of a huge delta between forecast and actual increased tax revenue from a tax hike occurred in 1990 when President Bush agreed to a 10% 'luxury tax' on expensive boats, airplanes, and I think jewlery.

While a small amount of luxury tax was collected, the tax revenue received was less than the cost of administering the luxury tax.

The luxury tax had the effect of wiping out the American custom yacht business and crippling the aircraft industry. Thousands of jobs were lost.