"We're not raising taxes on small-business people," Boehner told POLITICO during an election-eve interview in Columbus, Ohio. "Ernst and Young has made this clear: It's going to cost our economy 700,000 jobs. Why in the world would we want to do that?"

Predicting Republican victories, Boehner said his party would have "as much of a mandate as [President Obama] will — if that happens — to not raise taxes."

Boehner's election crystal ball was right on both counts.

Before the election, Republicans had 241 House seats in the House, with 191 held by Democrats and three vacancies. Six races are still undecided, but the GOP majority is likely to be cut by no more than seven seats. That would still give the GOP the second largest House majority since 1938, coming in just behind 2010's midseason victories.

But Obama has already indicated that he's not going to sign off on any fiscal cliff legislation that doesn't include higher tax rates for wealthier Americans.

So who's going to blink?

Some folks think a deal is suddenly in reach after Boehner made a prepared statement on Wednesday noting that the decision by voters to keep a Democrat in the White House and Republicans in control of the House means Americans want their political leaders to find common ground. 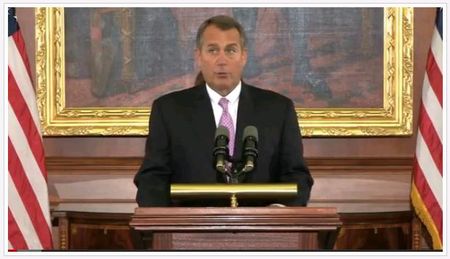 Look up compromise: But since Obama has held office, the GOP has stuck to that old line that compromise means getting the other guy to accept your side.

And while many are characterizing Boehner's remarks as more conciliatory, I don't see it.

Of course, "more" is a great qualifier, the difference between "No" and "Hell, no!"

I don't want the country to fall off the fiscal cliff. As I've noted many times here on the ol' blog, I'm looking forward to the day when I can write for the fun of it, not to make a living. If we face Taxmageddon, that personal goal will be in serious trouble.

But on the other hand, I am tired of seeing one political party bully the other. I don't know which makes me angrier, that the GOP keeps playing obstructionist or that the Democrats and Obama let them get away with it.

So this time, where Obama doesn't have to worry what the voters will do next election but Representatives and Senators do have such concerns, maybe we'll actually have a compromise.

As the saying went during the campaign, look it up. Wait. Here. I did it for you:

I think Boehner and his buddies need the lesson because I see some tax talk code in his statement.

No where in there does he say he'd consider raising taxes. He says he's amenable to increasing revenues. And he would accept that money if, he said, it comes from tax reform and economic growth.

And what exactly does tax reform mean in tax talk code? Doing away with deductions and loopholes.

So right now, we're starting with the same old standoff.

Most Americans say tax hikes OK: Maybe in addition to looking at the election numbers, where Democrats also picked up seats in the Senate, Boehner should also look at some more poll numbers.

Yeah, those numbers geeks never give it up.

And an exit poll question on Tuesday found that 60 percent of voters agree that it's OK to raise taxes. 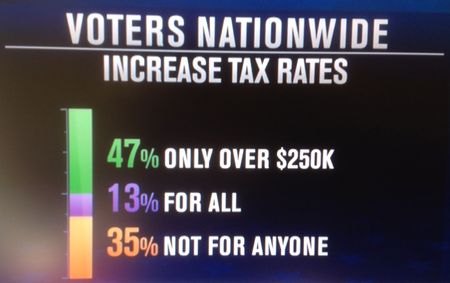 Yes, the graphic is lopsided. It's a cell phone photo of an MSNBC Jansing & Co. television program graphic and it makes it clear why I don't make my living as a photographer.

But the numbers are still very clear.

Those results, which are consistent with what the public has been saying for almost two years, make it clear that most Americans believe it's OK to help solve some of our country's fiscal problems by collecting a bit more from those making more.

We soon shall see if the House also gets and acts on this message.