Voters get their say Nov. 6 on 30 tax-related state ballot initiatives

Almost 200 various ballot questions made or will make it onto 39 statewide ballots in 2012.

The states with most propositions are Alabama and Florida with 11 each. California has 10. Arizona, Louisiana and Oregon voters will decide on nine ballot questions in their respective states.

The hot issues are marijuana, health, marriage and, of course, taxes.

Thirty-four of the 2012 ballot initiatives involve tax issues. Four were decided by voters earlier this year.

That leaves 30 tax-related referenda for voters in 15 states to decide when they go to the polls on Nov. 6. 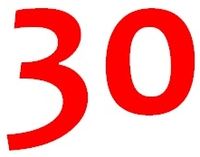 And 30 is this week's By the Numbers figure.

California tax questions: Although California doesn't have the most ballot questions this year, it was the Golden State that popularized state tax initiatives back in 1978 with passage of the famous, or infamous depending on your political and tax policy stance, property tax limiting Proposition 13.

This year, California voters will decide between two proposals to increase the state's taxes.

Proposition 30 would increase California's sales tax rate by 0.25 of a cent for four years and hike the state's income tax on earnings exceeding $250,000 for seven years. Currently, the average California sales tax rate is around 8 percent. The state's personal income tax rates range from 1 percent to 9.3 percent. The revenues generated would be used to fund schools and public safety programs. The state's 2012-13 budget plan, approved by Gov. Jerry Brown and the Legislature in June, assumes passage of this measure.

Proposition 38 would temporarily increase the state income tax rates for most Californians on a sliding scale. The increased revenue amount is estimated at around $10 billion a year. The money would go to kindergarten-through-grade-12 schools and early childhood programs, as well as to repay some state debt. The income tax increase would end after 12 years, unless voters reauthorize it.

If both Prop. 30 and Prop. 38 pass, the state's constitution specifies that the provisions of the measure receiving more "yes" votes prevail. Both measures also have sections intended to clarify which provisions are to become effective if both measures pass.

But if Prop. 39 is passed, that would change and would add an estimated $1 billion a year to the California treasury, according to the non-partisan California Legislative Analyst's Office. More than half that new revenue ($550 million) would be dedicated for five years to projects that create energy efficiency and clean energy jobs in California.

In addition to the three tax measures that California voters will decide, tax ballot initiatives this election include:


Alabama: Business Privilege Tax Amendment, Amendment 9, would continue the authority of the Alabama legislature to regulate and impose a business privilege tax on corporations and other entities.

Arizona: Property Tax Assessed Valuation Amendment, Proposition 117, would amend the Arizona Constitution to cap the annual increase in the value of real property used to calculate property taxes to 5 percent over the value of the property for the previous year. Currently, there is no limit on full cash value. The cap would begin with the 2015 tax year.

Arizona: Property Tax Break For Business Equipment Amendment, Proposition 116, would amend the state's constitution to allow the state to exempt from taxation the "full cash value" of equipment and machinery or "personal property" used in agriculture or in a trade or business. Currently all property in Arizona is subject to taxation unless it is specifically exempted.

Florida: Property Tax Amendment 4, would prohibit increases in the assessed value of homestead real property if its fair market value has decreased since the preceding Jan. 1. It also would create an additional homestead exemption for first-time homebuyers equal to 50 percent of the home's value, capped at the median home value in the county.

Florida: Senior Homestead Tax Exemption, Amendment 11, would allow counties and municipalities to grant an additional homestead tax exemption equal to the assessed value of homestead property if 1) the property is valued at less than $250,000; 2) the owner has lived there for at least 25 years; 3) the owner is at least age 65; and 4) the owner has a low household income as defined by general law.

Florida: Tangible Personal Property Tax Exemption, Amendment 10, would provide an exemption from ad valorem taxes levied by counties, municipalities, school districts, and other local governments on tangible personal property if the assessed value of an owner's tangible personal property is greater than $25,000 but less than $50,000. This new exemption, if approved by the voters, would take effect on Jan. 1, 2013.

Florida: Veterans Property Tax, Amendment 2, would allow partially or totally disabled veterans who were not Florida residents at the time of entering military service to qualify for the combat-related disabled veterans' tax discount on homestead property.

Kansas: Boat Property Tax Amendment, HCR 5017, would allow the state legislature, beginning in tax year 2013, to classify watercraft on a different basis from other property. Currently, boats are assessed at 30 percent of fair market value.

Louisiana: Business Property Tax Exemption, Amendment 8, would grant of ad valorem tax exemption contracts by the Board of Commerce and Industry for businesses located in parishes which have chosen to participate in a program established for the granting of such contracts.

Louisiana: New Iberia Property Tax Exemption, Amendment 6, would grant of ad valorem tax exemption contracts by the city of New Iberia for property annexed by the city after Jan. 1, 2013.

Louisiana: Property Tax Exemption for Veterans' Spouses, Amendment 4, would exempt from ad valorem taxation, in addition to the homestead exemption, the next $75,000 of value of property owned and occupied by the spouse of a deceased veteran with a service-connected disability.

Michigan: Taxation Amendment, Proposal 5, would prohibit the state from imposing new taxes, expanding the base of taxation or increasing the rate of taxation unless there is a vote of two-thirds of the members of each house of the Michigan legislature or there is a statewide vote of Michigan voters.

Missouri: Proposition B Cigarette and Other Tobacco Product Taxation, would create the Health and Education Trust Fund with proceeds of a tax of $0.0365 per cigarette and 25 percent of the manufacturer's invoice price for roll-your-own tobacco and 15 percent for other tobacco products. Proceeds from the new tax would be used to reduce and prevent tobacco use and for elementary, secondary, college and university public school funding.

New Hampshire: Income Tax Amendment, CACR 13, would prohibit the state from enacting a personal income tax. Yes, astute tax observes, the Granite State currently has no income tax on wage or salary income, just on interest and dividend earnings. This would keep it that way.

Oklahoma: Intangible Tax Ban Amendment, State Question 766, would exempt all intangible personal property from property tax. The change would apply to all tax years beginning on and after Jan. 1, 2013.

Oklahoma: Property Tax Amendment, State Question 758, would limit the increase in the fair cash value of a homesteaded property or a property used for agricultural purposes to the lesser of 3 percent or the rate of inflation.

Oregon: Corporate Tax "Kicker" Funds for Education Initiative, Measure 85, changes the "corporate kicker" provision of the Oregon constitution. Under current law, certain excess corporate income and excise tax revenues collected during a biennium are returned to corporate taxpayers. Measure 85 would require the excess revenues to be retained in the state's General Fund and used to provide additional funding for kindergarten through 12th grade public education.

Oregon: Estate Tax Phase-Out Initiative, Measure 84, would phase out the state's estate tax or other death transfer taxes. The measure would apply to estates of residents who die during calendar year 2013. That initial year, the tax is 75 percent of the tax that would be due if the death occurred before passage of the measure. The estate tax would be reduced by an additional 25 percent for each subsequent year, with the Oregon estate tax eliminated for people dying in 2016 or later.

Oregon: Real Estate Transfer Tax Amendment, Measure 79, would prohibit governments from imposing new real estate transfer taxes. This would cover either a tax, fee or other assessment imposed on the sale or transfer of real property or a tax based on the value of the real estate.

South Dakota: Sales Tax Increase Measure, Initiated Measure 15, would increase the state general sales and use tax rate from 4 percent to 5 percent. The additional tax revenue would be split evenly between K-12 public education and Medicaid.

Utah: Military Property Tax Exemption, Constitutional Amendment B, would authorize a property tax exemption for real property that is owned by and the primary residence of a person in the military, or the person's spouse, or both. In order to receive the exemption, the military member must serve in federal active duty outside Utah for at least 200 days in a calendar year or 200 consecutive days.

Utah: Severance Tax, Constitutional Amendment A, would require a portion of the revenue from all of the state's severance taxes, except for such revenue used for Indian tribes, to be deposited into the permanent state trust fund beginning July 1, 2016.

Washington: Two-Thirds Vote Required to Raise Taxes, Initiative 1185, would prohibit the state legislature from raising taxes unless such action is approved by a two-thirds vote in both the state's House of Representatives and Senate. Currently, such tax increases are allowed if approved by a simple majority vote in both chambers.

Thanks to the many researchers at the National Conference of State Legislatures, CaliforniaChoices.org, the Pew Center on the States, the University of Southern California's Initiative & Referendum Institute, BallotPedia and the Ballot Initiative Strategy Center for all the great background on these tax referenda.

If I missed any tax questions, drop me a note in the comments section and I'll add them.

And if you'll be deciding the fate of a lot of ballot initiatives on Tuesday, be sure you give yourself plenty of time to vote.