IRS sued over pulpit electioneering, but few got election messages at church

Concern about tax-exempt religious groups literally using a bully pulpit to get their congregants to vote a certain way apparently was greatly exaggerated. 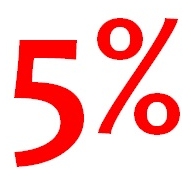 Only 5 percent of voters who attend religious services monthly or more reported hearing explicit political directives from their clergy, according to a recent Pew Research Center poll.

And that small percentage is this week's By the Numbers figure.

Ninety-three percent of the Pew poll participants said they didn't get any electoral endorsements from their religious leaders.

Of the few who did, 3 percent reported that they were urged by their clergy to vote for Republicans. Less than 1 percent said their pastors urged votes for Democrats.

Overall, Pew pollsters found that among voters who attend religious services at least once a month, 13 percent said information on political parties or candidates for the 2012 election was made available in their place of worship.

This election year's numbers are comparable, according to the non-partisan public opinion research organization, to the percentage receiving such information in 2008 (15 percent) and is lower than the percentage in 2004 (27 percent).

Internal Revenue Service Publication 1828, Tax Guide for Churches and Religious Organizations, specifically notes that such groups tax-exempt status could be jeopardized if, among other things, they:

And some ministers have regularly decided to take political stands from their pulpits.

That's prompted a lot of folks to ask the same question that @RoxieTech put to the Obama Administration via Twitter:

And one group decided to do more than just ask questions.

The Freedom From Religion Foundation (FFRF) is suing the IRS for allegedly not enforcing electioneering restrictions on churches.

FFRF's suit, filed Nov. 14 in the U.S. District Court for the Western District of Wisconsin, argues that IRS apparent inaction is a violation of the Establishment Clause of the First Amendment and of FFRF's equal protection rights.

The group says there appears to be no evidence of IRS inquiries or action in the past three years against religious groups believed to be in violation of the election restrictions.

FFRF's suit notes that as many as 1,500 clergy reportedly violated the electioneering restrictions on Oct. 7, 2012, widely known as Pulpit Freedom Sunday since its inception in 2008.

FFRF is asking the the federal court to enjoin the IRS Commissioner from continuing "a policy of non-enforcement of the electioneering restrictions against churches and religious organizations."