Dennis Kucinich, U.S. Representative from Ohio and erstwhile Democratic presidential candidate, is at it again.

Kucinich, known as much for his wife, a UFO sighting at Shirley MacLaine's house, for wanting to impeach President Obama over Libya (last year, not in connection with the Benghazi consulate attack) and proposals such as creating a Department of Peace, now is taking advantage of the Hostess Brands' closure to resurrect a fat tax bill he first introduced years ago.

Kucinich's 112th Congress effort is H.R. 6599, the Stop Subsidizing Childhood Obesity Act. The bill's number also is this week's By the Numbers figure.

He dropped it in the hopper on Nov. 16, the day Hostess announced that its 18,000 workers would lose their jobs and its iconic Twinkies, Cupcakes and Wonder Bread were possibly doomed.

The bill would, according to the legislative language, "protect children's health by denying any deduction for advertising and marketing directed at children to promote the consumption of food at fast food restaurants or of food of poor nutritional quality."

It's now sitting in the House Ways and Means Committee where it will die because:

Sure, 11 of Kucinich's colleagues on both sides of the aisle are cosponsors, but this bill is, like so many others, just for show. But the Hostess situation gave him an opening to pull this bill, which he also introduced in the 111th Congress, out of mothballs.

Now I'm not saying that Kucinich isn't concerned about our children's health. But let's get real.

When he introduced this identical bill in December 2009, it didn't get out of Ways and Means before the end of that legislative session a year later. That's what's going to happen this time, too, since we have only a few weeks left in this Congress.

And did I mention that it's a silly bill.

But you can't blame a guy for trying (or a blogger for using a popular news peg, too). 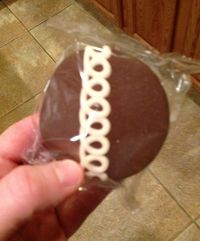 Hostess treats potential tax: If the Kucinich bill ever miraculously made it into law, Hostess products would no doubt be affected on the bill's grounds of "poor nutritional quality."

Let's check the label of my favorite Hostess treat, the gone-for-now* crème-filled chocolate cupcake for the dietary damage.

(*I'm counting on you Grupo Bimbo to buy the orphaned Hostess brands and keep them on my grocery shelves! Or at least for Austin's Hey Cupcake! trailers to offer a homemade version.)

It has 160 calories. Sure, they're all wasted calories from sugar and carbohydrates, but it's only 160 calories. 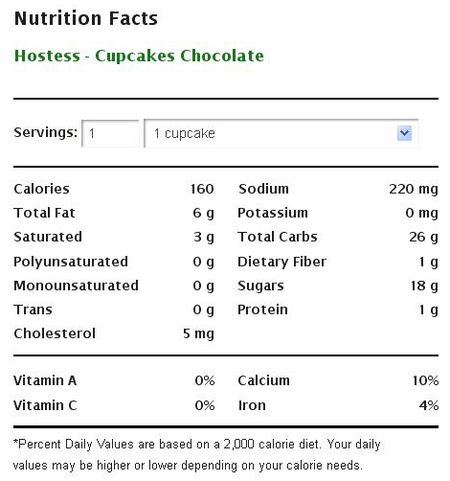 The salt component, however, is 220 milligrams.

And while obesity definitely does cause health problems, so does high blood pressure. And salt is a major contributor. I know because I have mild hypertension, which has prompted me to dramatically cut back my salt intake.

But any time I eat any processed food, I'm getting a huge dose of sodium. The same can be said for most restaurant meals I consume.

Most of those products and dining establishments, however, would be exempt from the Kucinich tax because he specifies fast-food joints. Plus, they don't tend to advertise to kids.

As for those on-the-go eateries looking to lure young diners, guess what, Dennis. They're ahead of you.

McDonald's has already made changes to its Happy Meal to address concerns about kids' menu items. And as Mickey D's goes, so does the rest of the fast-food world.

So, Rep. Kucinich, who is serving his last House term, and your remaining Congressional colleagues, just stop trying to take care of us and our diets. We will or won't do that ourselves as we see fit or, in the case of cupcakes and the like, not so fit!