Romney 'makes up' a new, higher tax deduction limit during the debate 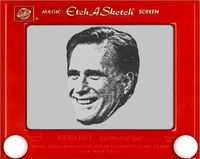 Just when you thought Mitt Romney was offering some specifics about his tax plan, he goes and shakes the Etch-a-Sketch again.

On Monday, he told a Denver television reporter that "you could say everybody's going to get up to a $17,000 deduction" limit under which each taxpayer could claim whatever eligible expenses he or she had that tax year.

Then last night during the first presidential debate, Romney revised his Schedule A math.

He didn't mention his $17,000 limit, which many itemizing taxpayers viewed as way too low. Instead, he invited us to "make up a number" to use as a deduction limit:

"I want to bring down the tax burden on middle-income families. And I'm going to work together with Congress to say, OK, what — what are the various ways we could bring down deductions, for instance? One way, for instance, would be to have a single number. Make up a number, $25,000, $50,000. Anybody can have deductions up to that amount. And then that number disappears for high-income people. That's one way one could do it. One could follow Bowles-Simpson as a model and take deduction by deduction and make differences that way. There are alternatives to accomplish the objective I have, which is to bring down rates, broaden the base, simplify the code, and create incentives for growth."

The emphasis in Romney's debate remarks is mine because I think a $33,000 increase in deductions is pretty significant, both to taxpayers who will claim the deductions and the U.S. Treasury which would be collecting much different amounts depending on the limit.

Hey, as long as we're making up deduction limits, maybe we could get some creative leeway on the allowable expenses themselves. Too much? Just a thought.

But in all seriousness, I am wondering who got to the candidate first and spent longer talking to him about the limit amount, his campaign staff or deep-pocketed contributors who represent certain industries <cough. Real estate. cough.>.

Anyway, we're back to essentially not knowing what Romney would do to our taxes.

Maybe he'll shake that 1960s-era toy again before the next presidential debate and give us yet another tax take.

Zilch with the zingers: OK, were you as disappointed as I was that there were no zingers in last night's debate?

Romney, with all his downsizing experience, could have at least said "I'd like firing Big Bird." Now that's a zinger.

Instead, he backed into his oft-stated pledge to eliminate public funding of PBS by admitting that he actually likes the huge yellow fowl, as well as former PBS News Hour anchor and debate moderator Jim Lehrer.

C'mon Mitt. You can do better than that. Let us see what you've got at the second debate on Oct. 16.

It was clear early on that Jim Lehrer lost control early on. Neither candidate stopped when asked to, and Jim just acquiesced.
POTUS failed to ask some of the tough questions, one of which I asked Romney myself - Where are the returns for the last five years?
If I were Obama, I might have been a bit more aggressive as in "What are you hiding?"
To be fair, Romney exceeded expectations, perhaps the bar was set so low he hurdled over it by not putting his foot in his mouth.

I am biased, so I'll not pick a winner. The losers were Big Bird (Fired by Romney. But maybe a winner as his plight became a cause celebre), Jim Lehrer, (Fired by Romney, and a poor job overall), Donald Trump (Big, only in his own mind, but according to POTUS, a small business man), and last, the person tweeting for KitchenAidUSA (Of all things, s/he tweeted a negative Obama remark from the KitchenAid Twitter account instead of his/her own. Goodbye to that job.)