As Hurricane Sandy was just beginning her trek up the east coast, pre-emptive disaster declarations were issued by governors of the states that expected to take a hit from the so-called Frankenstorm. 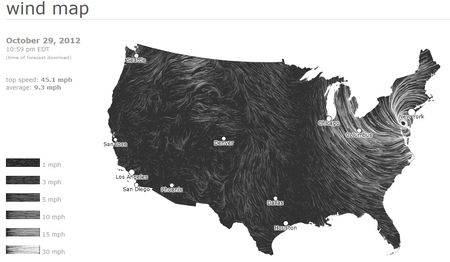 This is a map of the winds at 11:30 p.m. Eastern Time on Monday, Oct. 29, as Hurricane Sandy made landfall in southern New Jersey. Her eye is clearly visible. Click on the image for a larger view and go to Wind Map to see what's blowing around the country right now.

And today President Obama announced what are likely to be just the first of several major disaster declarations to help folks get federal help as they start to recover from the Sandy's damages.

Among the federal assistance now available in these disaster regions are:

That's just a very short list of federal assistance. You can check out the complete coverage at the Federal Emergency Management Agency's detailed recovery pages for New York and New Jersey.

And if you live in one of the other Eastern Seaboard states that suffered from Sandy's winds and rain, you can follow FEMA's disaster declaration Web page for updates on future additions to the major disaster list.

Tax help, too: As I've noted way too many times over the years following all types of natural catastrophes, folks who sustain damages to their property from a presidentially declared disaster also might be able to get some help via their tax filing.

Basically, the tax law lets you time shift your loss.

You generally must deduct a casualty loss in the year it occurred. But a loss incurred from a federally declared disaster means that you can choose to deduct the loss on your return for the year it happened or amend the previous year's return and claim it as if happened then.

Why would you want to amend a return when you're already dealing with the hassle of cleaning up after a storm? Because it could get you some tax money in hand sooner.

Let's say you claimed the standard deduction on your 2011 taxes. You had a few expenses you could have itemized, but you didn't have quite enough to exceed your standard claim amount.

But now when you add your 2012 storm losses to those other prior year itemized expenses you didn't claim, it makes sense to file a Schedule A. In fact, by doing so, you'll get a bigger refund on your 2011 taxes.

Write the name of the federal disaster on the top of your amended return -- yes, you still have to file it by hand because the Internal Revenue Service doesn't yet accept e-filed 1040X forms -- so that the IRS will give it prompt processing attention.

That way you'll have your extra tax cash in hand this year to help you pay for your storm repair costs.

If, however, you run the numbers and it makes more tax sense to wait and claim the storm casualty losses on your 2012 return, then do that. As with all filings, disaster or not, you want to file and use the deduction method that will give you the best tax result.

The IRS offers general guidance on disaster claims, as well as more detailed instructions in Publication 547. My Bankrate story also offers tips and examples on filing a disaster-related casualty loss.

You also might be able to get some tax relief from your state officials. New York, for example, has postponed certain tax filing and payment deadlines for Empire State residents who were directly affected by Hurricane Sandy. Check with your state department of revenue for details.

I hope that you came through Sandy with no or minimal damage, because that's always better than any kind of tax help you might get.

But if that wasn't the case, take care to keep track of your storm and insurance data as your put your home and life back together and then decide whether you want to file an amended return or claim your losses on your taxes next filing season.