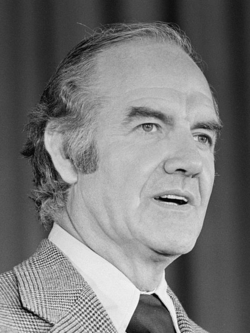 George S. McGovern died this morning at a hospice facility in Sioux Falls, S.D. He was 90.

McGovern was best known as the Democratic presidential candidate who was soundly defeated by Richard Nixon in 1972.

That election also was the one during which the Democratic Party headquarters in the Watergate office complex was burglarized, leading to Nixon's resignation two years later.

In addition to his presidential aspirations, McGovern represented his home state of South Dakota for more than 20 years, first in the House of Representatives and then in the Senate. An unabashed liberal, McGovern was a steadfast champion of left-wing social and economic reforms and a vocal critic of the Vietnam War.

He also was named by three presidents to represent the U.S. at the United Nations on issues ranging from disarmament to world hunger. In 2002, McGovern joined former Republican presidential nominee Bob Dole to provide education and food to poor children in the U.S. and around the world.

Before entering politics, McGovern was a World War II veteran who flew 35 combat missions as a B-24 bomber pilot and was awarded the Distinguished Flying Cross.

I remember the Watergate break-in and the Washington Post's unraveling of Nixon's complicity. That was my introduction to the potential and power of journalism.

I already was well aware of politics. The first presidential election I remember was John F. Kennedy vs. Richard Nixon. I was a preschooler, but my parents always paid attention to politics and my younger brother and I absorbed it, too.

In my small West Texas hometown, way before cable news and Internet coverage, we'd periodically drop by the local newspaper office and check out the election results. They were updated as local votes were tallied and the wire services reported on national races via handwritten sheets taped up in the paper's window for all to see.

I finally got to go beyond watching my parents vote and cast my first ballot while I was in college. That was the 1976 election where Jimmy Carter beat the man, Gerald Ford, who took over after Nixon was forced out of the White House.

That also was where, away from the home where my political views were shared, I encountered my first chance to debate the issues. And I discovered that some folks didn't want to discuss differences, but simply preferred to deface signs posted for the other candidate.

But the system remains. And despite its problems or what you think of it, it's what we've got. So vote.

I can't honestly say I don't care who gets your vote. But I can sincerely say that I respect our right to vote. Too many people don't take advantage of this opportunity. Don't be one of them.

So I urge you to vote even if your ballot will cancel out mine.

In keeping with my stroll down election memory lane, I'd love to hear from y'all about when you first voted for a presidential candidate.

After taking the poll, feel free to elaborate on your experience in the comments section.